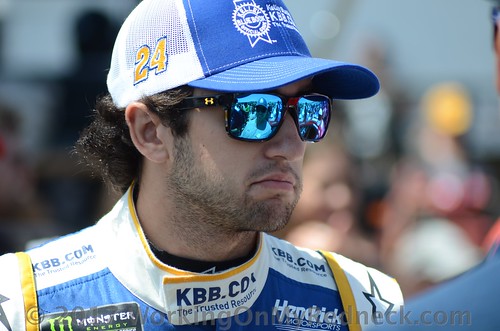 When Chase Elliott travels to Michigan International Speedway, he must feel like Sisyphus – the king in Greek mythology forced to roll a boulder up a hill, and when he reaches the pinnacle, the boulder rolls off, forcing him to repeat the process for all of eternity!

The No. 24 Hendrick Motorsports driver has made three Monster Energy NASCAR Cup Series starts in the Wolverine State and has finished second all three times.

Elliott enters Sunday’s contest coming off a series of solid, yet unspectacular performances. He placed 13th last week at Watkins Glen, 10th at Pocono, 39th at Indianapolis due to engine trouble and 11th at New Hampshire. Still he ranks 14th on the playoff grid, 39 points ahead of Clint Bowyer on the cutoff line. Elliott has little margin of error when it comes to making the postseason, but can guarantee himself a playoff berth by grabbing a win at Michigan.

“I like Michigan, I’ve always liked going up there,” Elliott said. “I really love that area. It’s just a cool part of the United States to go to. I like it up there – it’s a nice area and that is kind of why I like going.”

Could this be the weekend that Chase parks the No. 24 squarely in Victory Lane?