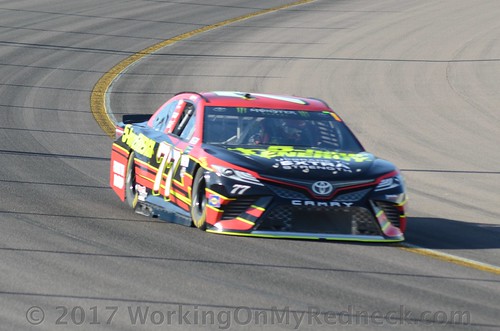 The aggressive race strategy the No. 77 5-hour ENERGY Extra Strength Toyota team has developed throughout the season is something driver Erik Jones believes can pay off in a big way Sunday at Michigan International Speedway.

The Byron, Mich., native heads into the Pure Michigan 400 weekend in 18th place in the NASCAR Cup Series point standings with just four races remaining in the 26-race regular season. The need for a win in his rookie season is now paramount above earning his way into the playoffs in the point standings.

“We feel like we’ve been pretty aggressive on strategy pretty much every week and trying to give ourselves the best shot to win,” said Jones. “We’ve still gotten some good finishes out of it, but I definitely feel like we’re more aggressive on strategy than we were the first part of the year.  I think when you look at the schedule we feel like we’ve got some good tracks coming up. Michigan will be a good one for us. We’re not looking for top 10s. We’re looking to try to go out there and snag a win.”

Despite growing just 70 miles north of the 2-mile speedway in Brooklyn, Jones didn’t attend too many races there. What he may not have known at the time was he was preparing to compete twice annually at Michigan International Speedway.

“I didn’t go to MIS a ton when I was a kid” said Jones. “I actually only went a few times because we were racing. You know, I did go down there a few times. It was always just my dad and I, so that’s always a fun memory for me to look back on and think about. Obviously my dad was a race fan, and to share that time with him down there was pretty fun.

“My first truck race there (started seventh, finished third in August 2015) was a cool day, as well.  That was my first time ever at MIS (as a competitor), so I always kind of remember that day and hold it a little special. Just first race, the home track, it’s always kind of cool. I felt like I had to wait forever to get to run there with the age restrictions of NASCAR, but it was really cool to make my first start there.”

Jones has seen the improvement of both his Furniture Row Racing 5-hour ENERGY Extra Strength team and that of manufacturer Toyota.

“Toyota has really come around here this part of the season I feel like,” said Jones. “We’ve been really strong now for about the last month.  We’ve had some really fast 5-hour ENERGY Toyotas and had an opportunity to win as a whole a number of races.  Being in fast race cars is always a welcome opportunity, obviously, and the start of the year we had fast race cars, but they just weren’t — I wouldn’t say they were near as good as they are now.”