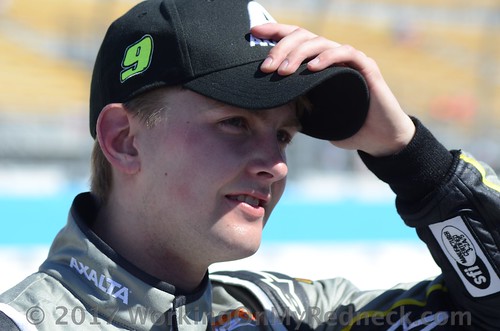 It is widely believed that Hendrick Motorsports will promote William Byron to the Monster Energy Cup Series next season to replace the departing Kasey Kahne. That announcement from the team is expected to made later this week, if reliable sources and rumors are correct.

The 19-year-old Byron is currently a rookie in the second-tier Xfinity Series, where he has three wins and ranks second in points driving for JR Motorsports, co-owned by Rick Hendrick, Dale Earnhardt Jr., and his sister, Kelley Earnhardt Miller.

Byron will drive the No. 5 Chevrolet with primary sponsorship from Liberty University, which has backed him in both Xfinity and the Camping World Truck Series. Axalta will also sponsor Byron in select races.

Having only raced actual cars for five years, Byron is regarded as a prodigy by industry insiders and heralded as one of NASCAR’s top prospects. His seven Truck Series wins as a rookie last year set a NASCAR national touring record for a first-year driver, a performance that compelled team owner Hendrick to recruit him away from Toyota-backed Kyle Busch Motorsports and place him in a JRM Xfinity car this season.

Byron takes over for Kahne, who Hendrick Motorsports announced Monday is being let go at the end of this season. Kahne, 37, had one year remaining on his contract, however, a combination of underwhelming results and a lack of sponsorship prompted Hendrick to make the change.

Since Byron joined the organization under a multi-year contract at the beginning of the 2017 season, Hendrick executives have viewed him has an option to replace Kahne, whose status with the team has been tenuous.

Initially, there was a lot of apprehension within the organization that it may be too soon to elevate Byron after just a single season in the Xfinity Series.  But the teenager’s recent results, he’s won three of the past seven Xfinity races and emerged as a championship favorite, along with his long-term potential and good rapport with sponsors were factors that just could not be ignored.

Byron’s presumed advancement comes with Hendrick amid a transition period. Kahne’s departure after six years with the team follows Earnhardt Jr. announcing in April he would retire from full-time competition at the end of the current season and four-time Cup champion Jeff Gordon retiring after the 2015 season.

In 2018, the Hendrick lineup could span the gamut of experience. Along with seven-time Cup champion and team mainstay Jimmie Johnson, 41, it also consists of Byron, Alex Bowman, 24, and Chase Elliott, 21, none of whom have competed in more than two full Cup seasons.

Johnson and Elliott, who replaced Gordon, each recently signed multiyear extensions. Bowman is under contract through 2019 and was named in July to replace the retiring Earnhardt Jr. as driver of the No. 88 Chevrolet.

If, in fact, this presumed announcement happens, and both “Bowman The Showman” and young William Byron pan out, it could put HMS in a very strong competitive place that could keep the company extremely viable for many years to come!