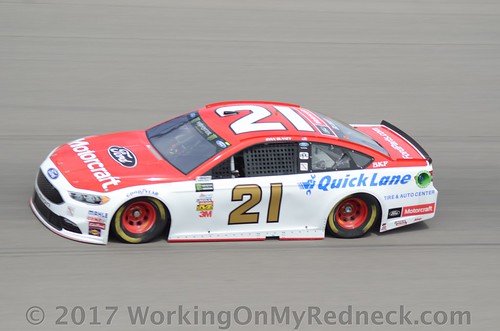 In the midst of one of their best seasons in years the Wood Brothers and their young driver, Ryan Blaney, are headed to Michigan International Speedway hoping for a strong run in front of their long-time backers at Ford Motor Company.

Blaney and the No. 21 Motorcraft/Quick Lane Ford Fusion have a win this season at Pocono Raceway, two other top-five and seven other top-10 finishes and a pole at Kansas Speedway.

They’ve scored stage points in 17 races so far and are set for the team’s first appearance in NASCAR’s playoffs.

Another impressive run, in Sunday’s Pure Michigan 400 at MIS, would give the Woods and Blaney a chance to show their appreciation to both Motorcraft/Quick Lane and Ford Performance for helping the team return to the winning ranks in NASCAR’s elite division.

“It’s Ford’s home track, and running well there is a way of thanking our friends at Ford for supporting us through the years, through all the ups and downs.

“With their support we’ve been able to get back to full-time status and in position to compete for wins and championships.”

Also represented on the No. 21 Ford Fusion this weekend is associate sponsorship from SKF, which was a primary sponsor for the Wood Brothers in two races last season and has been a long-time supporter of motorsports, including a relationship with Wood Brothers’ technical partner, Team Penske.

SKF is a leading global supplier of bearings, seals, mechatronics, lubrication systems, and services. The company is represented in more than 130 countries and has around 17,000 distributor locations worldwide.

Over the years, Michigan has been one of the better tracks for the Wood Brothers. They have 11 wins there, from their first one in the track’s inaugural Cup race in 1969 with Cale Yarborough driving, to their most recent one, with Dale Jarrett in 1991.

More recently, Blaney had a fourth-place finish at Michigan in the fall of 2016 and was poised to score another top-five in June before a late-race incident knocked him out of contention.

“For a long time, we ran really well at Michigan,” Wood said. “Then there was a period of time when we didn’t run so well up there.

“But the last couple of years, with Ryan on board and with our relationship with Team Penske and with the additional technical support from Ford Performance, we’ve been competitive at Michigan again.

“I’m feeling really good about this weekend.”
TIL NEXT TIME, I AM STILL WORKING ON MY REDNCK!