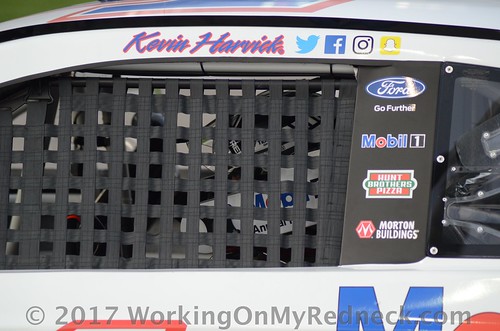 ●  The Busch Beer driver worked his way into the top-15 by lap nine.

●  Harvick reported a lack of rear grip halfway through Stage 1.

●  Harvick wheeled his Busch Beer Ford to pit road on lap 18 prior to the conclusion of Stage 1, dropping to 29th.

●  The Busch Beer Ford raced inside of the top-10 until lap 35, when the team called Harvick to pit road to correct the handling issue.

●  Harvick opted to stay out rather than pit at the end of Stage 2 to gain track position.

●  Harvick started moving forward at the start of the final stage, breaking back into the top-15 by lap 49.

●  Harvick came to pit road on lap 53 after he reported his car’s handling had not improved. Unfortunately, the No. 4 made contact with the No. 83 on pit road, resulting in Harvick having to back up to his box for the team to change tires and make significant repairs.

●  The team battled adversity again on lap 87 as smoke began coming out of the right-rear side and Harvick reported that something broke in his Ford Fusion.

●  Harvick dropped back from his 13th-place running position to ultimately finish 17th.

●  There were three caution periods for a total of eight laps.

●  Martin Truex Jr. won the I LOVE NEW YORK 355k at The Glen to score his 11th career Monster Energy NASCAR Cup Series victory, his fourth of the season and his first at Watkins Glen. Matt Kenseth finished second by .414 of a second.

●  Truex leads the championship point standings with 881 points and has a 116-point margin over his nearest pursuer, Kyle Busch.