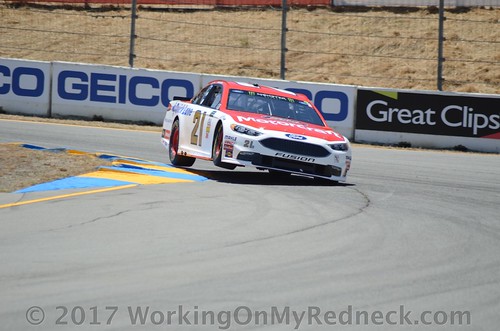 With their win earlier this season at Pocono Raceway assuring them of a playoff berth, Ryan Blaney and the Motorcraft/Quick Lane team took a gamble on winning at Watkins Glen but came a couple of laps short on fuel.

Blaney was leading with three laps to go when the engine in his No. 21 Fusion began sputtering, so he ducked on to pit road for a splash of fuel. Nonetheless, he was able to score an eighth place finish, his best-ever result on a road course in NASCAR’s elite series.

Team co-owner Len Wood said he was proud of Blaney and crew chief Jeremy Bullins for coming so close to his team’s 100th career Cup victory.

“We took a shot at winning rather than saving fuel and finishing about fourth,” Wood said.

“We needed to run about 36 and a half laps on fuel. I thought we’d be OK, but we burned a little more fuel than we thought.

“I was proud of the whole team. Ryan drove a really good race, and Jeremy called a good race.”

Blaney qualified 16th and got his first big break when Bullins called him to pit road with three laps remaining in the first 20-lap Stage. That meant Blaney would have no chance of scoring stage points in the first stage, but the strategy set him up to advance through the field when the rest of the leaders made pit stops.

When the pit stops cycled through, Blaney wound up in fourth place at the end of Stage Two, earning seven bonus points.

It was the 17th time in the 22 races so far that he’s scored stage points, and Sunday’s bonus points ran his total for the season to 159.

With the track position gained by Bullins’ early move, Blaney ran among the leaders for the remainder of the race, which was slowed by cautions just three times, two of which were for the end of the first two stages.

He stopped for fuel and tires with 37 laps remaining and returned to the track in fourth place.

As drivers ahead of him stopped for fuel, Blaney inherited the lead with four laps remaining. But he ran dry too, handing the lead back to eventual winner Martin Truex Jr.

Even with the late stop, Blaney wound up eighth at the finish.

“I am pretty proud of the effort,” said Blaney, who remains 12th in the championship standings with four regular season races still to run. “We got up front at the beginning of the day and stayed there pretty much all day. I thought our strategy was right and we had a good race car.

“Things just didn’t work out for us. That is just the way it goes sometimes.”

Blaney and the Motorcraft team now head back to Michigan International Speedway, where in his most recent race there he was in contention to win before a late-race incident dropped him from the top five to a 25th-place finish.