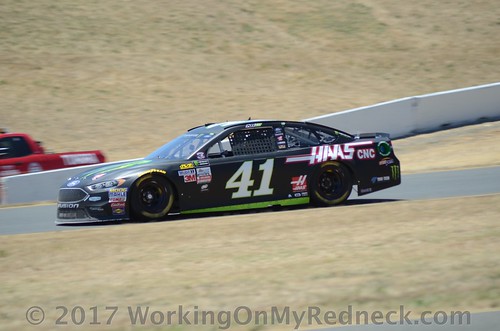 ● Busch ran in the 14th position for the majority of the stage.

● On lap 16, Busch pitted under green-flag conditions for four tires, fuel and adjustments, and came off pit road in 27th.

● At the conclusion of the stage, Busch did not pit and gained 18 positions for the start of Stage 2.

● Busch battled to position his Haas Automation/Monster Energy Ford Fusion as high as seventh in Stage 2.

● He remained within the top-10 for the duration of the stage.

● Due to pit strategy, Busch opted not to pit at the conclusion of the stage.

● Busch raced in and around the top-10 for the majority of the final stage.

● Due to fuel strategy, Busch and many others were forced to conserve fuel.

● In the closing laps, several cars in the top-five pitted for fuel, promoting Busch just outside of the top-five.

● There were three caution periods for a total of eight laps.

● Twenty-nine of the 37 cars finished on the lead lap.

● Martin Truex Jr. won the I Love New York at The Glen 355k to score his 11th career Monster Energy NASCAR Cup Series victory, his fourth of the season and his first at Watkins Glen. His margin of victory over second-place Matt Kenseth was .414 of a second.

● Truex leads the championship standings with 881 points and holds a 116-point advantage over his nearest pursuer, Kyle Busch.

How do you feel you ran today?

“We ran hard on every single lap today and hit every turn flawlessly. We did a great job.”

ADillon Is Ready For Vegas