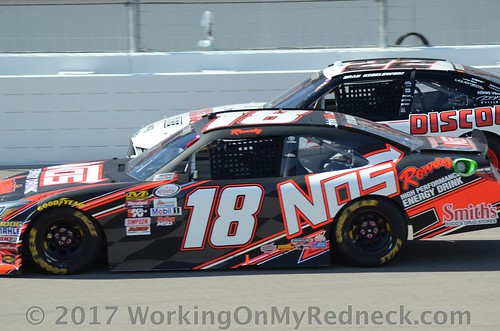 With a victory in Saturday’s Zippo 200, Kyle Busch continued to tick items off his bucket list.

Recovering from a wheel-hop and spin in Turn 1 on Lap 17 of 82 along with a penalty for driving through too many pit boxes, Busch claimed his first NASCAR XFINITY Series win at the 2.45-mile Watkins Glen International road course, beating polesitter Joey Logano to the finish line by 1.049 seconds.

“The cars have really been working for me here and it just feels so good to finally win an XFINITY race here,” said Busch, who won last week at Pocono for the first time in a Monster Energy NASCAR Cup Series car.

“We’ve been so close so many times. One of my favorite runs here was in a Zippo car (in 2008) and being in the Zippo race today that’s kind of ironic – I guess they sponsor it every year — but being with (owner) Eddie D’Hondt and the Zippo car, I remember we were really, really fast and wish we would’ve got that one.”

In winning for the fourth time this season and the 90th time in his career, Busch grabbed the lead when Brad Keselowski and Logano came to pit road together on Lap 49.

Busch gained time by staying on the track for five more laps, and by the time he exited pit road on lap 55, he was 1.2 seconds ahead of Brad Keselowski and more than 10 seconds ahead of Joey Logano, who had a lengthy pit stop because of a stuck lug nut.

“Pit road was pretty good for us,” Busch said. “We stayed out long on that one run, and we were able to cycle back up to the lead. It worked two weeks in a row that way. I don’t know how much longer we can do that before they figure it out, but it’s been working for us, so we’ll take it.”

Busch held the top spot the rest of the way, surviving a restart with three laps left after Casey Mears ran out of fuel and stalled on the track to bring out the fifth and final caution of the afternoon. Busch chose the inside lane for the restart to control the preferred line into Turn 1.

The restart brought Logano back near the front of the field, and on the next-to-last lap, he passed Keselowski, his Team Penske teammate, for the runner-up spot.

“Dang, I wish it was for the win and not for second,” Logano said of the battle with Keselowski. “I had such a good short run car, just in the wrong position to start that last run. I feel like, if I was second, I could have won the race. I just had a really good short-run car.

“Our long-run speed was off a bit, and that’s when the 18 (Busch) and 22 (Keselowski) would drive by us, and we were a third-place car on the long run, but probably a winning car on the short run. By the time I cleared the 22, the 18 was gone. If we had another four or five laps, (he would have drove off again). I needed a caution.”

Check out the unofficial results of the Zippo 200 at Watkins Glen.