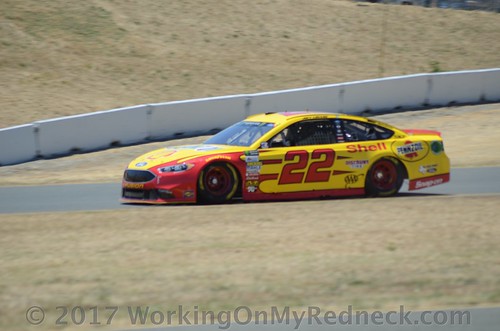 That at least, is the hope that buoys the driver of the No. 22 Team Penske Ford as he tries to force his way into NASCAR’s playoffs.

After a mistake-laden performance last Sunday at Pocono Raceway, where Logano finished 27th after multiple pit road penalties, the 2016 series runner-up is 13th in the standings, 69 points behind ninth-place Matt Kenseth, the last driver, as things stand now, who would qualify for the playoff without a victory.

Logano has a win, from Richmond in April, but an infraction involving the rear housing of his Ford, discovered after the race, means that victory is encumbered and doesn’t count toward qualification for the playoffs.

But the next five regular-season races, give Logano reason for optimism.

“I don’t think we’re at that point yet, but we’re close to the point where we’re going to have to win,” Logano told reporters on Tuesday night at a screening of the Steven Soderbergh film Logan Lucky, in which Logano has a cameo role as a security guard. “The positive side is that the next four out of five races (are at tracks) we’ve won at before.

“We’ve won at Richmond this year. Bristol’s one of our best tracks that we always run up front at. Michigan’s a really good track, but the fastest tracks haven’t really been our forte, at least not this year. And Watkins Glen has been one of my best tracks, honestly, for a couple of years. We finished second last year and won the year before. Our best shot might be this weekend. But we’ll fire away at it and see what happens.”

Logano is right about the Glen – the site of Sunday’s I LOVE NEW YORK 355. In addition to his two most recent Monster Energy finishes at the 2.45-mile road course, Logano is the two-time defending winner of the NASCAR XFINITY Series race at WGI. That track and Bristol, where he has won two straight Night Races, probably constitute Logano’s best chances to get to Victory Lane.

“Speed has been an issue,” Logano said. “At Indy (where he finished fourth two weeks ago) we had decent speed, and we were in a position to possibly win that race with the right race strategy, cautions going the right way and all that.