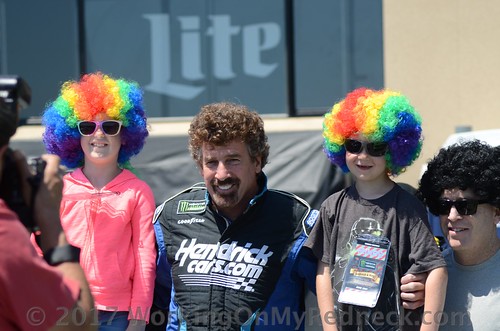 This week, the No. 33 Genesee Brewing Company Chevrolet will take the track at Watkins Glen during the Monster Energy Cup Series Race, piloted by NASCAR icon Boris Said. Fans will have a chance to meet the man behind the machine as he journeys to Watkins Glen this week.

Said and the No. 33 Chevrolet will be at retail events throughout the region, giving NASCAR and Genesee aficionados the opportunity to meet Said and take pictures with the iconic racecar driver.

Specific stops Boris will make this week include:

The No. 33 Genesee Chevrolet will stop at the following locations:

“Genesee Brewing Company is thrilled to be a sponsor and partner of Boris Said for the fourth consecutive year,” said Matt Goldman, channel marketing manager of Genesee Brewing Company. “The race in Watkins Glen is a great opportunity for fans to get out and enjoy a Genesee while watching Boris tear up the track.”

Said’s status at the track is already worth toasting, with 53 starts in the NASCAR Monster Energy Cup Series since 1999 and 16 NMECS starts at Watkins Glen, including two top-10 finishes, one top-five finish and a best finish of third in 2005. A New Yorker by birth, Said’s partnership with the state’s oldest brewery goes back four years and has continually brought a great show to fans of track and tap alike.

“The track, area and fans at Watkins Glen are some of my favorite in the world,” Said said. “After 31 years, I’m still excited like a little kid at Christmas to race at The Glen. Genesee’s sponsorship has turned into a great partnership over the past few years, and I hope I put on a great show for them and the crowd this year.”

About The Genesee Brewery

Slated for the summer of 2017, the Genesee Brewery will begin the first phase of a five year plan to create an Eco-Brewery District. Phase one includes a $39 million investment to modernize the brewery and create one of the most advanced brewing systems in the world. Combining modern innovation with the experience and heritage of New York State’s oldest brewery, Genesee will create a world class destination for beer and brewing on St. Paul Street in Rochester, New York.