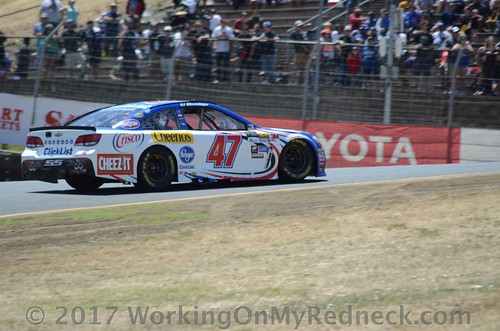 Win and you’re in is the name of the game in NASCAR these days. A visit to Victory Lane earns a driver a spot in the sport’s playoffs.

With five races left in the regular season, only three playoff berths remain.

Road course ace AJ Allmendinger –  who at 27th in the Monster Energy NASCAR Cup Series standings cannot get into the playoffs on points – will attempt to clinch a postseason bid in Sunday’s I LOVE NEW YORK 335 at Watkins Glen International.

The feat wouldn’t be unprecedented for Allmendinger, who captured his first career victory and playoff berth at Watkins Glen in 2014.

“Obviously, getting my first [Monster Energy] Cup win there is very special,” Allmendinger said about the Central New York road course. “It will be a place that no matter what I do the rest of my career will always be right at the top. Just a fun road course, very fast, I call it kind of the 1.5-mile of road courses. A lot of speed around there, especially since they repaved it last year.”

Allmendinger’s 2014 win was no fluke. In eight career starts at Watkins Glen, he has one victory, three top fives, five top 10s and a 9.4 average finish in eight starts. The No. 47 JTG Daugherty Racing driver finished fourth in last year’s race.

“(Watkins Glen is) a place that I really enjoy, but more than anything, every time I pull through under the tunnel there into the race track I go back to 2014, getting my first [Monster Energy] Cup win, our team’s first [Monster Energy] Cup win and just what that meant,” Allmendinger said. “That always pushes me a little bit harder knowing that feeling in Victory Lane and wanting to experience that again. We will go there, put on a show, get back into Victory Lane and have another giant party.”