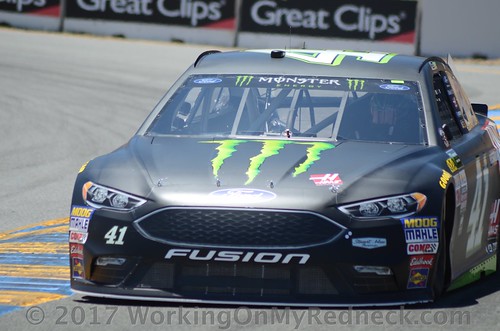 It looks like the NASCAR “Silly Season” has just shifted into overdrive!  Another shoe has dropped that has allowed another seat to become “available” at the end of this season.

Stewart-Haas Racing has informed Kurt Busch the organization will not pick up the option on the 2017 Daytona 500 winner and 2004 Monster Energy NASCAR Cup Series champion for next season.

Stewart-Haas has until midnight on Tuesday (when the company’s option expires) to reverse its decision, but the expectation is that Busch will not drive the No. 41 Ford for SHR in 2018.

The Las Vegas native came up through the Southwest Series tour before he was recruited by Jack Roush in 2000 to compete in the Camping World Truck Series. Busch won four races and finished second in the truck tour before moving to NASCAR’s premiere series in 2001.

Busch moved to Team Penske in 2006. He was recruited by Gene Haas to drive for the No. 41 Haas Automation team in 2014. Busch has earned four wins, five poles 21 top fives and 51 top 10s in the last three seasons with Stewart-Haas Racing.

Although this latest news is not totally a blind-side, it is nevertheless noteworthy and somewhat unexpected!