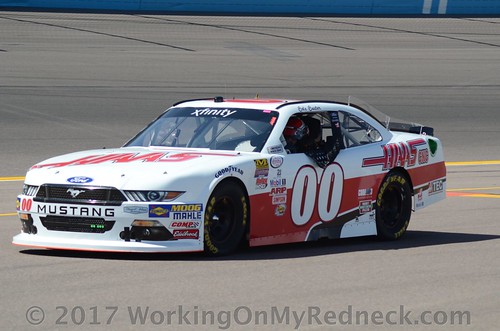 ● Custer ran in and around the top-five noting tight-handling conditions throughout Stage 1.

● Was the highest finishing rookie of the stage.

● Custer ran just outside of the top-five throughout Stage 2.

● Custer pitted for four tires and fuel at the conclusion of Stage 2 to correct tight handling conditions.

● Custer ran as high as third during the final stage.

● After a caution on lap 234, Custer opted not to pit and restarted in the third position

● Custer battled inside of the top-five until the conclusion of the race.

● Custer was the highest finishing rookie.

● Ryan Preece won the US Cellular 250 to score his first career XFINITY Series victory. His margin of victory over second-place Kyle Benjamin was .054 of a second.

“We had a really solid Haas Automation Mustang this week. We kind of struggled a bit last time we were here and wanted to improve on what we had, so we brought something completely different and it really paid off. The team did a great job bringing something new. We had bad restarts today mostly because we started on the bottom. I think we had at least a third-place car this weekend. It was fun to be good at a short track this year and, hopefully, we can keep that going. I can’t thank everybody enough – Tony Stewart and Gene Haas for the opportunity and Ford for another fast racecar.”