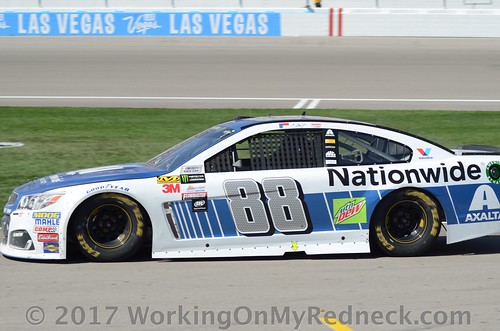 And given his current 22nd position in the standings in what will be his last season of full-time racing, his only realistic path to the postseason involves winning one of the next six races.

Based on his own history, Earnhardt feels Sunday’s Overton’s 400 at Pocono Raceway, and the race at Michigan in two weeks hence, offer him the best chance of reaching Victory Lane. But he still feels it’s imperative to take a winning attitude to the other four tracks – Watkins Glen, Bristol, Darlington and Richmond.

“I think here and Michigan are tracks that I obviously have got some wins, recent wins at, so there is going to be some more expectations going into those or more confidence going into those,” Earnhardt said on Saturday at Pocono. “I hate to say that because we’ve got to go in there and even, like I said on social media the other day, we’ve got to go into Watkins Glen like we can win.

“We’ve got to go in there with that attitude, if we want to win. If that opportunity falls in our lap, you have to have your head on straight. We will go to all these tracks with a great, positive attitude and see how it works out for us, but here and Michigan are probably the ones at the top of the list.”

Should Earnhardt fail to make the playoff, he would still crave a victory in the final 10 races. He pointed to his 2014 victory Martinsville, after he had been eliminated from the playoff, as one of the most significant of his career.

“Everybody was down and bummed out,” Earnhardt recalled. “We thought we had a great season. We were in the top three in points all year, and we just got bumped out. We had a couple of bad races. And we went to Martinsville and won, which for me is definitely in my top five as far as wins that I personally appreciate. And we celebrated and it was the greatest. You’d have never known that we were disappointed about anything. And all that disappointment and upset feeling was gone…

“If we can win any race before the end of the season, just to go back to Victory Lane and know that feeling one more time before it’s over with, that would be awesome.”

What  a fairy tale ending it would be if Dale Jr. earned his way inot the playoffs and could wrestle a chanpionship away from all the favored drivers!