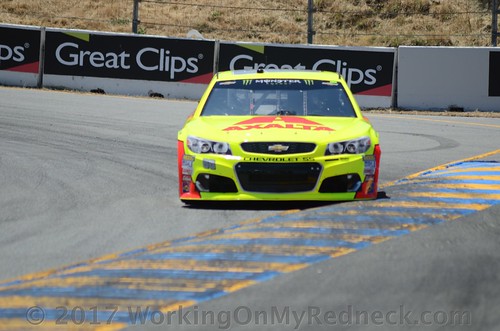 Kasey Kahne proved at Indy that all hope is not lost for Monster Energy NASCAR Cup Series drivers who are low in the point standings. Without even a top-15 finish to show in his previous eight races, Kahne battled his way to a win at the Brickyard and earned the automatic playoff berth that comes with one.

Sitting 22nd in the point standings – 213 points below Matt Kenseth on the cutoff line – Dale Earnhardt Jr.’s playoff hopes seem bleak at first glance. When looking at the upcoming schedule, Earnhardt and his massive fan base should have at least a glimmer of hope he can make the postseason in his final full-time Monster Energy NASCAR Cup Series campaign. The No. 88 Chevrolet driver claims a combined eight wins at the remaining six tracks on the regular season docket, including two at Pocono Raceway – the site of Sunday’s Overton’s 400.

“I feel bad for all the fans because they’ve been really supporting us and this has been a difficult season for them to see us not compete like we should or like we have in the past,” Earnhardt said. “I’m hoping that I can turn that around for all our sakes really soon.”

In addition to his two victories, the 14-time most popular driver has 11 top-five and 15 top-10 finishes in 34 career starts at Pocono. He has finished fifth or better in six of his last eight races at the Tricky Triangle.

If Earnhardt can’t pull through at Pocono, he can potentially triumph at Watkins Glen where he’s never won, Michigan (two wins), Bristol (one), Darlington (zero) and Richmond (three). He is particularly fond of Richmond because its layout is similar to Myrtle Beach Speedway where he grew up racing.

“We’ll go to the next race – Pocono – and keep digging,” Earnhardt said. “This is not the worst season by any stretch of the imagination – at least the cars have speed in them, we’ve just had some really bad luck. We’ve got a busy week coming up, but I’m so ready for Pocono.”

Can Dale Jr. punch his ticket to the playoffs this year?  Time is running out!