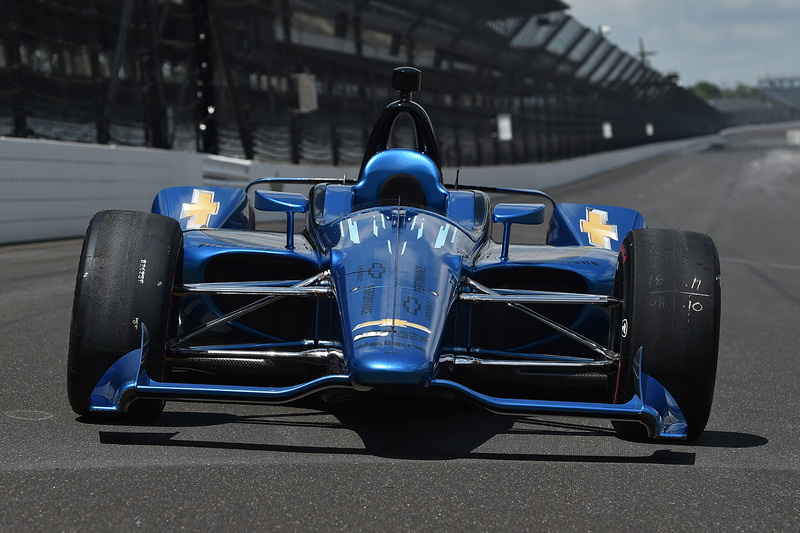 That’s when Juan Pablo Montoya pulled his blue Chevrolet-powered Dallara IR-12 out of pit lane and turned an installation lap. Fifteen minutes later, Oriol Servia did the same in his red, white and black Honda-powered Dallara. What made the seemingly inconsequential circuits of the 2.5-mile oval noteworthy is that both cars were equipped with the new universal aerodynamic bodywork kit that will be used by all Verizon IndyCar Series competitors beginning in 2018.

Montoya and Servia are expected to go through a complete checklist of test items today mandated by INDYCAR as it oversees the on-track program to confirm all working parts are in order. The veteran drivers were eager for the opportunity.

“It’s exciting to get the first run on the cars,” said Montoya, the two-time Indianapolis 500 winner who finished sixth in this year’s 101st running for Team Penske. “Hopefully, if things work out, (I’ll) have a shot at being here and race it (next year). We’ll see.”

Both drivers spent time over the weekend in a racing simulator at Dallara’s U.S. headquarters a few blocks from IMS, turning virtual laps at Indy with the 2018 kit setup to familiarize themselves with the handling characteristics. Servia, who finished 21st this year in his ninth Indy 500, was looking forward to the opportunity to help guide the development of the new car.

“I’m happy that they chose us,” Servia said. “Very honored. Hopefully, we can help a little bit having a better product than would have been without us.”

According to Jay Frye, INDYCAR’s president of competition and operations, the purpose of this week’s IMS testing and succeeding tests at Mid-Ohio Sports Car Course, Iowa Speedway and Sebring International Raceway is to establish that the universal kit meets all its base targets set out by INDYCAR in the development process.

“We got a plan that INDYCAR wants to make sure we go through,” Montoya said this morning before the cars turned laps. “We’re going to start really slow, making sure that the car matches what it’s supposed to do.

“But it’s normal every time you have a new car. The speed will get progressively faster. Hopefully at the end of the day, we’ll be doing some long runs.”

Frye looked somewhat like an expectant father as he surveyed the two cars in pit lane before the track opened for testing. He has shepherded the development program since it was announced in April 2016. Working closely with INDYCAR’s engineering and aerodynamic team, the car was “reverse engineered” to create a bold look that included the necessary aero and safety requirements and upgrades.

Despite all the development, simulations and wind tunnel testing, nothing was guaranteed before the engines fired today.

“There’s no preconceived notion of what’s going to happen,” Frye said. “There are always bugs that happen throughout a test, especially with a new product. We have some things, boxes we want to check, and that’s it. We’re not really here to test, it’s more of a sign-off event.”

Testing is scheduled for today and Wednesday at IMS, though Frye said the second day is only necessary if all items aren’t completed today. The two cars will remain under INDYCAR control until the confirmation testing is completed at Sebring. At that time, the two engine manufacturers will be provided two universal kits each and permitted to conduct a maximum of four tests of their own this fall.

Teams should receive their kits in November, allowing them time to prepare their cars for private team testing beginning in January.

But for now, Frye and the rest of the INDYCAR paddock are eager to have the rubber meet the road, as it were, at IMS.