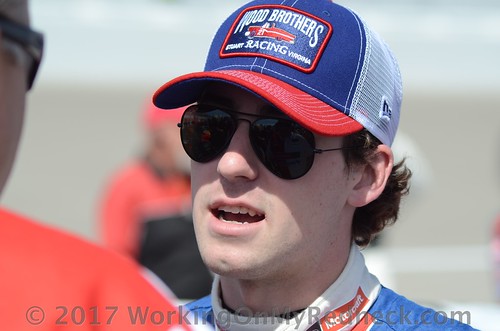 Team Penske announced today that Ryan Blaney will join the organization as a full-time driver in the Monster Energy NASCAR Cup Series (MENCS) beginning in 2018 as the team returns to a three-car operation in NASCAR’s premier series. The 23-year-old Blaney, who also signed a multi-year contract extension with the team, will pilot the No. 12 Ford Fusion, beginning with the annual non-points “Clash” event at Daytona International Speedway in February.

“For some time now, we have wanted to bring Ryan in to run a third car for us, but things just needed to make sense from a timing and business perspective,” said Roger Penske.  “We have been working on making this a reality and 2018 is the right opportunity to make this move and return our organization to a three-car team. The benefits of having three full-time teams under our roof, along with the continued technical partnership with the Wood Bothers, will help us remain competitive in the ever-changing NASCAR landscape.”

Blaney made his MENCS debut in 2014 for Team Penske and has driven for Wood Brothers Racing full-time the last two seasons. One of NASCAR’s rising “young guns,” Blaney earned his first-career Cup Series win earlier this season at Pocono Raceway, giving the Wood Brothers team its first MENCS win since the 2011 season. Blaney also scored his first Cup Series pole this season at Kansas Speedway. He finished second in the 2016 MENCS Rookie of the Year standings.

Blaney has been a part of Team Penske since 2012 and has earned five NASCAR XFINITY Series wins for the team and was part of the No. 22 team’s three-straight NXS Owners’ Championships from 2013-2015.

“This is a huge opportunity for me and my career,” said Blaney, a third-generation driver from High Point, NC. “I’ve always enjoyed racing whatever car I was in and trying to win each and every race. I’ve had some great moments with both Team Penske and the Wood Brothers over the last few years. I know for a fact I wouldn’t be where I am today without Roger (Penske), Eddie and Len (Wood) and the opportunities their organizations have given me. I’m thrilled knowing that Brad (Keselowski) and Joey (Logano) are long-term teammates for me at Team Penske and Paul (Menard) will have input with our team now that he’s with the Wood Brothers organization. Hopefully we can go out there and win races and compete for championships year after year.”

Earlier this season, Team Penske announced that it signed Joey Logano to a multi-year contract through the 2022 season and beyond. Just yesterday, the team announced it has come to terms with Brad Keselowski for a multi-year agreement, giving the organization a solid foundation for the future.

While the No. 12 Ford Fusion has made a handful of starts in the Cup Series over the last few years, Team Penske has not competed as a full-time, three-car team since the 2010 season with Keselowski, Kurt Busch and Sam Hornish Jr. Despite the fact that the team has only run two full-time cars since the 2011 season, Team Penske has produced 40 MENCS victories, along with the 2012 NASCAR Cup Series title, and the 2015 Daytona 500 Championship.

More details surrounding the No. 12 team, including sponsorship and crew chief, will be announced in the near future.