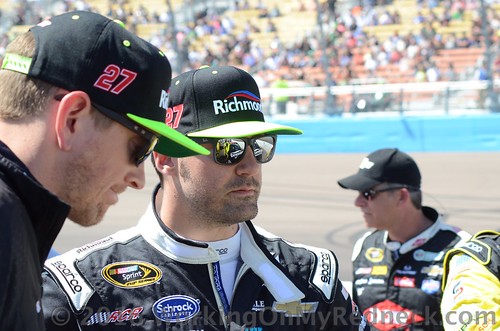 Wood Brothers Racing, the oldest active NASCAR team and one of the winningest teams in series history, and veteran driver Paul Menard, will join forces for the 2018 Monster Energy NASCAR Cup Series (MENSC) season, the two parties announced today. The new partnership will see the team continue to compete full time for the coming seasons with Menard driving the legendary No. 21 Ford Fusion.

Menards, the industry-leading home improvement store company, will sponsor the No. 21 Ford for 22 MENCS races.  Additional sponsorship, including plans for long-time partner Motorcraft/Quick Lane, will be announced at a later date.

“It’s fantastic to have the ability to continue to race in the highest level of motorsports full-time and something we look forward to doing with Paul for years to come,” said Eddie Wood. “I know this will allow us to continue to perform as an organization and will give Paul a great opportunity to go out there and compete for wins. Paul is not only a great driver with a lot of experience in the Cup Series, but he’s great with partners, which is a big part of what we do these days. We are looking forward to finishing out this season with Ryan (Blaney), going for more wins and maybe even a championship, and continuing that with Paul in 2018.”

Over the course of its history, the Wood Brothers Racing team has amassed 99 MENCS victories, the most recent coming this season with current driver Ryan Blaney at Pocono Raceway. Legendary drivers such as AJ Foyt, David Pearson, Curtis Turner, Tiny Lund, Cale Yarborough, Neil Bonnett, Buddy Baker and Dale Jarrett have all earned victories for the team. Both Glen and Leonard Wood have been inducted into the NASCAR Hall of Fame.

The team’s relationship with Roush-Yates Engines and the technical partnership with fellow Ford Performance organization, Team Penske, will also continue in 2018.

Menard has competed full-time in MENCS since the 2007 season. He won the 2011 Brickyard 400 at the legendary Indianapolis Motor Speedway and qualified for NASCAR’s Playoffs in 2015. In addition to his Cup Series victory at Indianapolis, Menard has also earned three NASCAR XFINITY Series (NXS) wins over the course of his career.

“I’ve really enjoyed my time in NASCAR and as a Cup Series driver, but to get the chance to drive the iconic No. 21 for the Wood Brothers is the coolest thing I’ve ever got a chance to do,” said Menard. “I’m looking forward to working with the team, working with Roush Yates, Ford Performance and Team Penske to see what we can do. Ryan (Blaney) has done a fantastic job and is a constant threat to run up front. Hopefully, we can do the same thing and keep the momentum going into 2018 and beyond.”

In addition, Menard will run a handful of NXS races for Team Penske beginning in 2018.