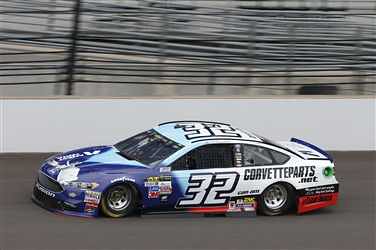 Matt DiBenedetto endured a racing marathon Sunday at the Indianapolis Motor Speedway.  The Brantley Gilbert Big Machine Brickyard 400 had a rain delay of about one hour and forty five minutes, 14 yellow flags, racing in near darkness, and large amounts of crumpled sheet metal by the time the checkered flag waved strewn on the race track!

As the green flag flew, DiBenedetto launched from the inside line of the 14th row, which equates to 27th position.  For most of the first stage the Corvette Parts / Anest Iwata Ford Fusion battled with A.J. Allmendinger, Ty Dillon, J. J. Yeley, David Ragan as well as Landon Cassill.  When stage number one came to a conclusion DeBenedetto  came across the line in 29th place.

When the racing resumes, after coming to pit road for much needed tires, fuel and a chassis adjustment, the Corvette Parts Ford Fusion dug in and continued the battle for positions in the heart of the  “war zone”.  DiBenedetto continued to carve out progress, all the while avoiding some of the mishaps and wrecks that began to take place.  At the end of the second stage, and all the hard racing with Landon Cassill, Chris Buescher, Cole Whitt, and Danica Patrick,  DeBenedetto gained one position to finish in 28th spot.

When the green flag dropped for the final stage of the race the racing ratcheted up a few notches, and the beating and banging really cranked up as well!  Likewise, that beating and banging started taking its toll on the race cars and the wreckage remains were strewn about the facility.  As the darkness set over the Indianapolis Motor Speedway, the final segment came to an end with just a few cars still able to roll around the track.  During this final stage Dibenedetto was battling with David Suarez, Kevin Harvick, Chris Buescher, as well as The Dinger.   Matt was successful in bringing the Corvette Parts /Anest Iwata Ford Fusion home in 8th place after the six hour marathon concluded.