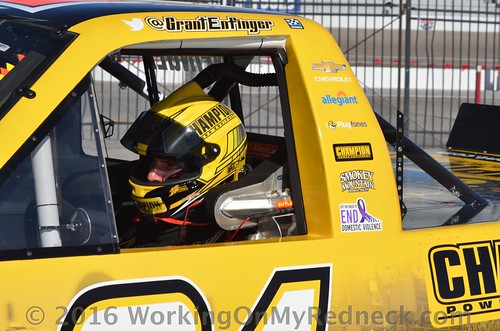 Although you will be making your debut at Pocono in the Truck Series, you have eight starts, including a win, at Pocono in the ARCA Racing Series. What are the keys to getting around the “Tricky Triangle?”

“I’ve never been to Pocono in a truck, but I’ve had some good runs there in the past, in ARCA. Everyone always talks about the tunnel turn and how it’s a big part of making a good lap at Pocono, but I put a lot of focus on Turn 3 because that sets you up for that mile long straightaway.”

There are five races remaining before the start of the Truck Series Chase. You are currently in the 2017 Chase, based on points, but do you feel the pressure to win now, to firmly secure your spot in the Chase? Do you think you can secure your spot this weekend at Pocono?

“There is always a lot of pressure to win, and as racers, most of the time we put the most pressure on ourselves. We want to win every time we unload the truck, so I don’t feel like there is any added pressure to win right now than there is every week. That being said, I feel confident we can get that win this weekend, and solidify our spot in the playoffs. This is a track I like, and Jeff Hensley has had some fast trucks there recently as well, so I feel good about our chances.”