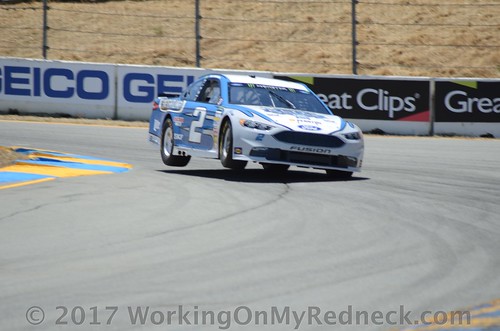 Team Penske announced today that the organization has reached an agreement with Brad Keselowski to remain with the team as the driver of the No. 2 Miller Lite Ford Fusion well into the future. The multi-year extension ensures that the 2012 Monster Energy NASCAR Cup Series (MENCS) Champion and 23-time MENCS race winner will continue to be an integral part of Team Penske – the only team he has driven for full-time over the course of his 10-year MENCS career.

The announcement follows the news that No. 2 team crew chief, Paul Wolfe, has also agreed to a multi-year extension with Team Penske.

“In the time that Brad has driven for Team Penske, he has risen to the top echelon of stars in NASCAR,” said Roger Penske. “Brad and Paul have established a terrific, winning combination and they are both real leaders within our team. More than just wins and championships, Brad is an important part our relationship with Ford Performance and his work with the Checkered Flag Foundation shows what kind of person he is away from the track. There is no question he continues to be a great fit for our organization.”

Since joining Team Penske in 2009, Keselowski has earned 22 MENCS wins and the 2012 series championship while driving the iconic No. 2 Ford Fusion. In addition, the Rochester Hills, Michigan native has scored 29 NASCAR XFINITY Series (NXS) victories, won the 2010 NXS Drivers’ championship and he’s been a part of three NXS Owners’ titles while driving the No. 22 Ford Mustang. Keselowski has produced two MENCS victories and one NXS win so far this season and has qualified for his sixth trip to the NASCAR Playoffs.

“Roger and everyone at Team Penske have given me everything we need to win championships at the highest levels of NASCAR,” said Keselowski. “As I have said all along, Team Penske is where I want to be and I am thrilled to continue with the organization well into the future. I have a lot of years left in the sport and I truly feel our best years are ahead of us.”

Keselowski first came on board at Team Penske toward the end of the 2009 MENCS season and Wolfe joined him prior to the 2010 NXS campaign. The two promptly won the 2010 NXS Drivers’ championship with six wins and an NXS-record 26 top-five finishes. Wolfe then joined Keselowski on the No. 2 MENCS Ford and the duo earned their first win at Kansas Speedway in just their 13thseries start together. In their seven-plus MENCS seasons, Keselowski and Wolfe have become one of the premier driver-crew chief combinations in the sport and have earned six trips to the NASCAR Playoffs.

“There is no one I want helping make my racecars go fast more than Paul Wolfe,” continued Keselowski. “We have a lot of continuity between the two of us, and really the entire No. 2 Ford team, which is so important in today’s NASCAR. With partners like Miller Lite, Alliance Truck Parts, Wurth, Autotrader, Fitzgerald Glider Kits, Discount Tire and Ford Performance in our corner, I feel like we have the strongest overall program in the sport.”

Keselowski has recorded 51 wins while driving for Team Penske, making him the second-winningest driver in team history. He is just eight victories away from tying Team Penske Hall of Fame member, Mark Donohue, for the top honor.

“Mark Donohue is the driver that Roger was able to build this team around over 50 years ago, a man who won our first NASCAR Cup Series race and our first Indianapolis 500. I am truly blessed to be close to tying his record for wins with Team Penske and this extension will allow me to place my name beside such a legendary driver,” added Keselowski.

Keselowski continues to climb the ranks of NASCAR’s all-time greats. His 23 career MENCS victories tie him with Ricky Rudd for 33rdon the career wins list. With 35 career NXS victories, he ranks fifth in all-time series wins. Keselowski is also one of only four drivers to win both a MENCS championship and NXS title in their career.