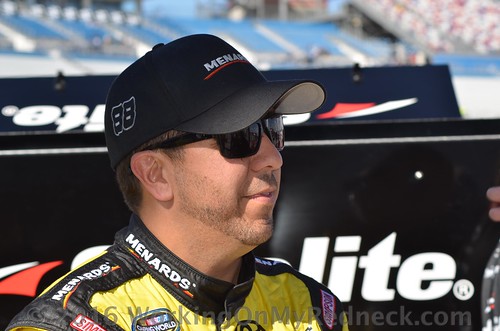 You’re fourth in the standings, and you have a win, locking you in the Chase. Does this change your approach to the rest of the season?

“No. I wanna win more races, and it will all take care of itself. NASCAR has put such an emphasis on getting the wins – they mean so much for the playoff points. Then, if you win the regular season points, you get 15 bonus playoff points going into the Chase. We need to go run down Johnny Sauter, he’s leading it right now. We need to go out there and win some more races, and build ourselves a cushion.”

They say it’s hard to be perfect in all three corners at Pocono. Is there one that you would feel more comfortable, if you got through it a little better than the other two?

“Yeah, Turn 3. I mean at the end of the day, if you can make Turn 3 your best corner – because it’s such a long front straightaway – you’ll gain a lot of time. That’s where a majority of your passing goes on, down that front straightaway. Getting that big run off of Turn 3, will set you up for the front straightaway, it’s key.”