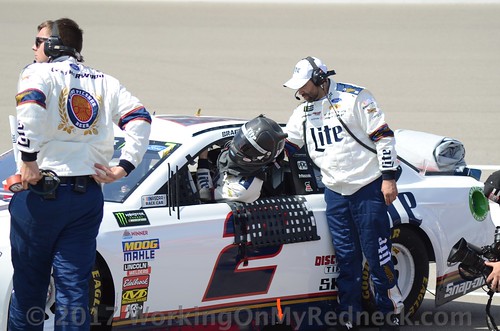 Recap: With just two laps remaining in Sunday’s Brickyard 400 at the Indianapolis Motor Speedway (IMS) it appeared Brad Keselowski would give Team Penske their first win after triumphs in a record 16 Indianapolis 500s, but Kasey Kahne was able to maneuver around the No. 2 Miller Lite Ford Fusion to take the win in a race that spanned over six hours due to inclement weather. Keselowski began the race from the 11th position and when the green flag fell it was clear that the No. 2 Ford was not handling like a car that would contend for the win in one of NASCAR’s biggest races. Keselowski radioed to crew chief Paul Wolfe that he was wickedly loose in and off the flat IMS corners, but super tight in the center. After completion of only 17 laps NASCAR red-flagged the race and IMS cleared the grandstands as lightening, followed by heavy rain, was detected in the area. Nearly two hours later the race resumed and Wolfe began working on the handling of the Miller Lite machine. Unfortunately, Keselowski was only able to finish 20th in the first stage but the car was improving with each pit stop. An early caution at the start of the second stage allowed Wolfe to bring Keselowski down pit road for a fuel-only pit stop in hopes that the stage would stay green the rest of the way as they now had enough fuel to make it to the end. A lap 71 caution, nine laps before the end of the second stage, thwarted those plans, but Keselowski was able to score a ninth-place finish in the stage to pick up two bonus points. After starting the final stage from the ninth position, Wolfe made another fuel gamble and kept his driver on track longer than any other crew chief, in hopes of scoring a timely, late-race caution that would force other teams to follow Keselowski down pit road late in the race to preserve their track position. At lap 150 their perseverance paid off when Keselowski was scored as the race leader when a caution was displayed. Only two cars stayed out and a great pit stop by the Miller Lite crew set the No. 2 Ford team up to challenge for the win. Restarting third, but on much fresher tires, Keselowski worked his way through two more caution periods to grab the lead as the race went into an overtime scenario. After choosing to restart in the outside lane at lap 166, Keselowski was not able to hold off Kahne just as dusk was starting to set over IMS and crossed the finish line second to give Team Penske five runner-up finishes in the race.

Quote: “You know, we just have to take our result and move on. We weren’t necessarily the fastest car today, but the Miller Lite Ford team did a hell of a job executing. I wish I could have executed a little bit better to bring home the win. I’m not sure what that would have took. But all in all, good to have a top finish at this track. I think our best finish coming to this race here was ninth. Kind of checked this one off as at least getting a top finish. Maybe not a win, but, you know, a top‑three, top‑two finish. So it’s nice to check that off and hopefully we can come back here next year and improve one more spot.

Recap:  Joey Logano started seventh and finished fourth in the No. 22 Shell-Pennzoil Ford Fusion in Sunday’s Brickyard 400 at the Indianapolis Motor Speedway. Logano dropped several spots on the initial start after he had to lift for the No. 11 of Denny Hamlin entering the first turn. Logano was able to work his way back to the top-five before the end of the first stage, after waiting out a nearly two-hour rain delay. Much of the team’s track position gain in the early stages of the race came from fast pit work by the Shell-Pennzoil crew, who in the first stop, gained the team four positions. The crew continued the work gaining positions on the next two stops, all while making adjustments to the Ford Fusion to improve the handling in each of the speedway’s four turns. Varying pit strategy relegated the team to the back half of the top-10, but Logano was able to rebound and climb to the seventh position before the end of the second stage. The team moved as high as third, but then pit strategy once again would put them on the offensive as other teams pitted off sequence and then cycled to the front of the field. In the closing stages of the race, Logano was able to survive numerous accident, escaping with no damage to the Shell-Pennzoil Ford. On the final restart, the team would line up fifth and once again had their momentum stalled as the field entered turn 1. However, Logano would make the move to the inside of the backstretch and miss the final accident of the afternoon, which marked the end of the event. The fourth place finish was the team’s first top-five since Michigan in June, and was also a step in the right direction in terms of on-track speed. The team will move on to Pocono where Logano is a former winner as they look to secure a victory and lock themselves into the 2017 Monster Energy NASCAR Cup Series playoffs.

Quote: “We’re getting better. I thought we had a fast Shell-Pennzoil Ford today. We didn’t execute as well as we needed to and that kind of got us back a little bit, and then we were able to gain some spots back at the end and get a top-5 out of it. I felt like the two cars that were better than us wrecked, so I feel like that was our chance to win and we just didn’t capitalize. The positive side is our car got faster. The bummer is we didn’t win.”