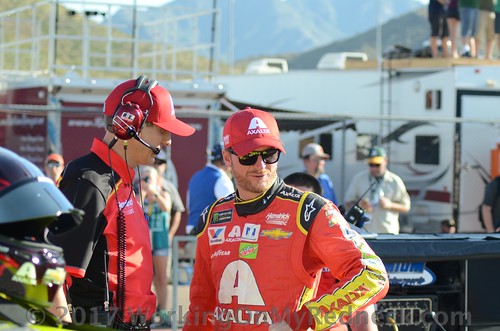 The two-time Daytona 500 winner Earnhardt, 42, who is retiring from full-time competition at the end of the season, has worked in the live television booth a handful of times — including at this year’s “The Clash” preseason opener during Daytona Speedweeks — as well as some XFINITY Series races over the last two years.

NBC broadcasts the second half of the Monster Energy NASCAR Cup Series and NASCAR XFINITY Series seasons. NBC also is partnering with Earnhardt on Dirty Mo Media and Hammerhead Entertainment.

“It is a tremendous honor not only to join NBC Sports next year but to begin a new career alongside people who love NASCAR as much as I do,” Earnhardt said in an NBC release. “To be reunited with Steve Letarte, to be able to call legends like Jeff Burton, Dale Jarrett and Kyle Petty teammates rather than just friends, to be able to continue going to the track and connecting with race fans, it’s a privilege I don’t take lightly. I will devote my heart and soul to this broadcast team and pledge my very best to the millions who watch it.”

Mark Lazarus, Chairman, NBC Broadcasting and Sports hinted that Earnhardt Jr. could have an opportunity outside of NASCAR as well.

“We are excited to welcome Dale Jr. to our team – both on and off the track,” Lazarus said. “As a company, NBCUniversal allows for talent to stretch themselves across not just their field of expertise, but across other areas of their interests in the media world.”

“I think he’d be an excellent broadcaster,” NBC executive Sam Flood said during a call with media members in June. ” … He’s a talented guy and I think he’d be quite an addition to any broadcast because he’s curious, asks good questions and cares deeply about the sport.

“That’s the hallmark of our group. These people care deeply about the sport of NASCAR and the growth of NASCAR. … Junior’s got a bright future, it’s up to him where he wants to do it and what the opportunity might be for him.”

NBC television analyst Jeff Burton, a 21-race winner who retired from NASCAR competition three years ago, also gave his thumbs-up to Earnhardt’s potential behind a microphone.

“It’s difficult (to leave),” Burton conceded. “But it gives you an opportunity to have an impact on the sport and continue to have the relationships you’ve built over a lifetime and quite honestly to talk about something you’d be watching anyway.

“I love watching racing and Junior’s no different. It’s been a great transition (for me) and I think it would be for Junior as well.”

JUNIOR NATION rest easy!  You all will be seeing Dale Jr. beginning in the second half of the 2018 season every Sunday afternoon.