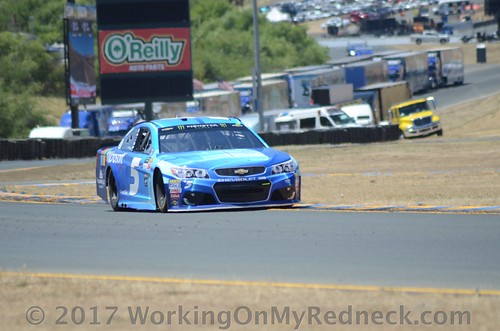 In semi-darkness, as the sun set behind the frontstretch grandstand at Indianapolis Motor Speedway, Kasey Kahne did all he could to dispel the shadow overhanging his Monster Energy NASCAR Cup Series season and his racing career.

With a phenomenal restart in the second overtime of Sunday’s Brantley Gilbert Big Machine Brickyard 400, Kahne cleared race leader Brad Keselowski through the first two corners and crossed the overtime line on the backstretch before NASCAR called the record 14th caution of the race.

That ended the event with Kahne in the lead, and when he took the checkered flag under yellow a lap and a half later, the driver of the No. 5 Hendrick Motorsports Chevrolet had his first victory since an eleventh-hour win at Atlanta in August of 2014 that propelled him into NASCAR’s postseason.

Kahne was breathless with exhaustion in Victory Lane, the result of withering heat inside the cars in a prolonged race that featured three red flags, one for rain and lightning and two for incidents. But the implications of the triumph weren’t lost on him.

“The career is big, for sure—but the win and the history here,” Kahne said. “To win at this track is unreal. We used to always be really close. We lost to Jeff (Gordon) and we lost to Tony (Stewart); just some fast cars back then.

“Today, strategy got us here. This Farmers Insurance Chevrolet was great once I got out front. I just had to get there. I’m exhausted. But, an unbelievable win. The team just kept working. We had great pit stops.”

The pit stop that mattered most occurred on Lap 150, when Kahne came to pit road moments before a vicious wreck on the frontstretch eliminated the cars of Clint Bowyer, Kurt Busch and Erik Jones, all of whom had been running in or near the top 10 throughout the afternoon.

Kahne had fresh rubber and stayed on the track when the cars ahead of him came to pit road for tires on Lap 151. Suddenly at the front of the field, Kahne battled Keselowski on three successive restarts before the decisive second overtime.

Kahne status in the No. 5 car has been ripe for the rumor mill this season. Asked Sunday morning about plans for the ride next year, team owner Rick Hendrick would say only “That’s another day,” during a press conference heralding Alex Bowman as the successor to Dale Earnhardt Jr. in the No. 88 Hendrick Motorsports Chevrolet.

Asked post-race what the victory does for Kahne’s future, Hendrick replied, “It puts him in the (playoff).”

But the uncertainty that surrounds Kahne’s status in the No. 5 did nothing to diminish his accomplishment at the historic Brickyard.

Keselowski had taken the lead during the first overtime restart, but a huge wreck on the frontstretch—triggered when Trevor Bayne turned sideways after a push from Michael McDowell as the cars approached the start/finish line—aborted the attempt.

For the second overtime, Keselowski chose the outside lane, leaving Kahne on the bottom in a racing groove covered with Speedy Dry fluid absorption material. But Kahne pulled off a magnificent restart and powered into Turn 1 at full steam.

“Well, the one before just didn’t work,” said Kahne, who picked the outside lane and lost the lead on the short-lived restart for the first overtime. “Everything went wrong. On the final one, everything went right. And once I got to Turn 1, I had good power and was able to clear him off (Turn) 1. I’m exhausted. And, it’s pretty crazy.”

Keselowski, who was trying to give team owner Roger Penske a first Brickyard 400 victory, gave credit where credit was due.

“Kasey did a heck of a job today and drove a hell of a race,” Keselowski said. “I’m happy for him. I thought we were in the right spot. You had seen the same thing all day when you’d get somebody on the outside, and in the corner you got real loose.

“He drove in there and it just stuck. I don’t know. I may have had the wrong lane there or made the wrong call. I’m not sure. The car was on edge and then some.”

By the time Kahne took the checkered flag, the two fastest cars in the race had long since been eliminated—in the same wreck. Polesitter Kyle Busch, who led a race-high 87 laps, was racing side-by-side with Martin Truex Jr. after a restart on Lap 111 when Martin Truex’s No. 78 Furniture Row Racing Toyota got loose underneath Busch’s No. 18 Joe Gibbs Racing Toyota, causing a collision that crippled both cars.

Ultimately, it was Kahne who seized the opportunity their exit presented.

Check out the unofficial results of the Brickyard 400.