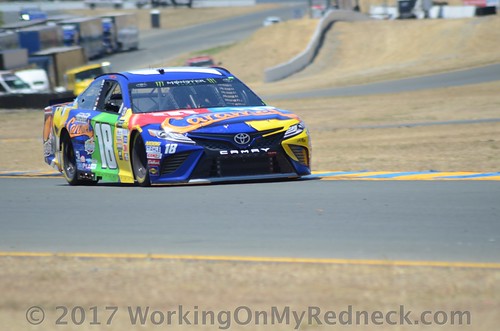 Busch sits third in the points standings and has five stage wins along with seven top-five finishes in 19 starts this season. Most drivers would take Busch’s season in a minute, but it hasn’t been up to the standards of the 32-year-old Toyota driver, who has won 175 career races across NASCAR’s national series.

On Sunday, Busch will travel to one of his top tracks – Indianapolis Motor Speedway – where he’ll attempt to win for the third consecutive race in the Brantley Gilbert Big Machine Brickyard 400. In addition to his two straight wins at Indianapolis, Busch has finished second or better in his last five races there.

“I think the biggest thing about the Brickyard is the prestige, the track’s history and the quality of racing – all the historic finishes it’s had over the years, whether it has been IndyCar or NASCAR,” Busch said. “To me, it’s a special place to go because of its heritage of being Indianapolis.”

“The prestige of winning (at Indianapolis) is a big deal,” Busch said. “It’s a unique place to race. If you are back in traffic, it’s a little more frustrating because it can be hard to pass there. But, if you have a fast race car, being able to cut the middle and get down the long, fast straightaways is important there.”

Will Kyle Busch establish a new record and a new club Sunday, of which he would be the only member?