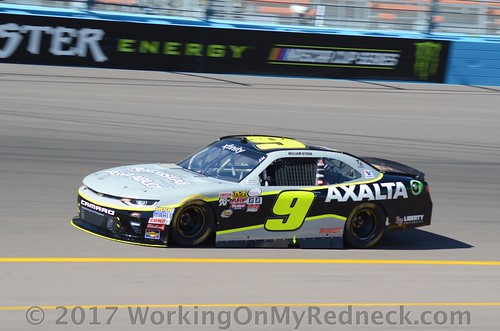 The Hendrick Motorsports young gun, William Byron, has proven why Rick Hendrick signed him to a development contract last season.

The 19-year-old Charlotte native has been the highest finishing NASCAR XFINITY Series regular over the last five races. Included in that stretch are two wins, a runner-up and a third-place showing last week in New Hampshire.

Byron will attempt to continue his breakout run in Saturday’s Lilly Diabetes 250 at Indianapolis Motor Speedway – a track where he’s never made a start. The No. 9 Chevrolet driver has shot to second in the XFINITY Series standings, 45 points behind Elliott Sadler. Byron leads the XFINITY Series with 11 playoff points.

“I am really looking forward to getting to Indy this weekend,” Byron said. “We’ve had a great stretch of races and I think we can build on that and hopefully compete for a win this weekend.”

Now that the HMS No. 88 cockpit has has been filled for 2018 by Alex Bowman, that should give Byron and his supporters some relief that Byron will not be rushed up to Cup before he is ready.  Another year in the Xfinity Series to further hone his racing skills before jumping up the the Cup level competition will only make Byron a better and more confident driver.