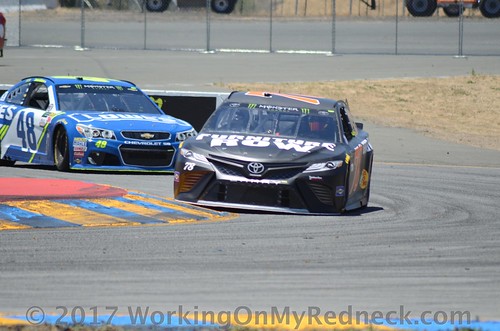 In a short period of time the blue Auto-Owners Insurance Toyota paint scheme for Furniture Row Racing has made a potent statement in the NASCAR Cup Series.

“Yeah, there is no question when the blue Auto-Owners Toyota hits the track it either wins or is right there competing for a win,” said driver Martin Truex Jr., who leads in the overall driver point standings and also the playoff standings.

A look down memory lane will validate what Truex is saying when Auto-Owners has been the primary sponsor on his No. 78 Toyota Camry.

The Auto-Owners/Furniture Row Racing partnership started one year ago in the Brickyard 400 at Indianapolis Motor Speedway where Truex was running in the top three late in the race. However, due to a flurry of cautions, Truex settled for an eighth-place finish when the race was completed in overtime.

But the next race for the blue car is one that Truex remembers with mega fondness after winning the Southern 500 crown jewel at Darlington (S.C.) Raceway.

“Winning the iconic Southern 500 will go down as one of my biggest, if not the biggest victory of my career to date,” said Truex.

Truex and Auto Owners ended the 2016 season with a seventh-place finish at Martinsville (Va.) Speedway.

The first two races of the current season with the Auto-Owners sponsorship have produced similar results for Truex. He won at Kansas Speedway and placed sixth at Michigan International Speedway.

In five career races with Auto-Owners Insurance as the primary, Truex has two wins and five top 10s and an average finish of 4.4.

“Any way you look at it, that’s a pretty good average,” said Truex. “You know, we should have won the Michigan race too. The Auto-Owners Insurance Toyota was without a doubt the best car on that Sunday.”

Truex and Auto-Owners will team up again in the Brickyard 400 scheduled for Sunday at the fabled 2.5-mile oval.

“This is going to be a tough race because it takes so many different things to be fast there,” explained Truex, a three-time winner this season. “The track has long straightaways and flat corners. You just have to have everything go your way at Indy. The hardest part is managing all four corners. They look the same but they are definitely different. Some have bumps and some are slippery – it’s just a tough challenge.

“Stage racing is going to have an effect too. Everybody looks at Indy like it’s a road course. It will be a challenge to try and win the stages and also try to win the race. You have to have track position at Indy. Some tough decisions will have to be made during the race.”

In 12 career starts at the Brickyard 400, Truex has one top five and three top 10s. He had finishes of fourth and eighth the past two years.