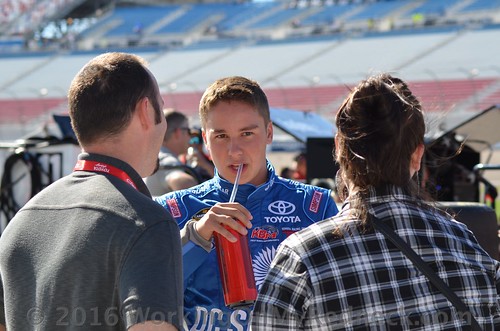 Kyle Busch Motorsports driver Christopher Bell is widely considered a dirt dynamo. He grew up in Oklahoma and got his start in racing with sprint cars in 2011. In 2013, Bell won the USAC National Midget Championship and in 2014, he won 24 Quarter Midget races and 26 total dirt races, including the Turkey Night Grand Prix.

Bell got a full-time NASCAR Camping World Truck Series ride with Kyle Busch Motorsports in 2016 and would prove how good he is on dirt tracks as he finished second at Eldora to Monster Energy NASCAR Cup Series driver Kyle Larson.

During the 2016 NASCAR off-season, in what’s highly regarded as the “Super Bowl of midget racing,” Bell won the 2017 Chili Bowl Nationals.

When asked about his career thus far after winning his third NASCAR Camping World Truck Series race this season last Thursday at Kentucky, Bell was proud that he’s been able to race cars at all levels and be successful.

When asked if he has an advantage at Eldora in a NASCAR Camping World Truck Series truck, Bell was not shy in his answer.

“Eldora is different. The trucks are hard to drive. I enjoy it because I have an advantage whenever I go there over the other guys. I call it the week of Eldora now because I’ve been able to run the Kings Royal before the truck race. The week of Eldora is my second favorite week of the year besides the Chili Bowl.”

You can find the audio from that post-race media availability here.

Race fans, put your hard earned cash on this young man to lead the field to the checkered flag Wednesday night at Eldora!

TIL NEX TTIME, I AM STILL WORKING ON MY REDNECK!