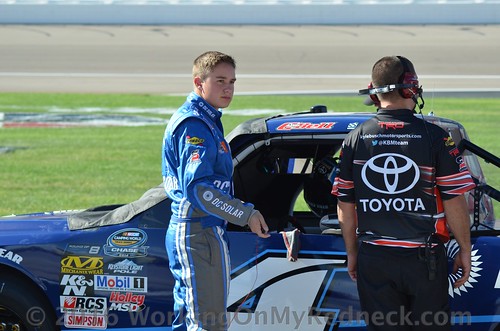 Eldora’s qualifying and race formats differ from the knockout qualifying seen weekly in the NASCAR Camping World Truck series. Below is a guide to how it works.

The top-five trucks from each qualifying race will transfer to the race. Upon completion of the qualifying races, 25 trucks will earn spots in the NASCAR Camping World Truck Series race.

The 32nd starting position goes to the most recent eligible past series champion; if that position is not filled by an eligible champion, it will be assigned based upon owner points.

The race will be 150 laps divided into three stages: Stage 1 ends on lap 40, Stage 2 ends on lap 90, and the Final Stage ends on lap 150. During the competition cautions at the stage breaks on Lap 40 and Lap 90, caution laps will not count and positions cannot be improved on pit road.

Teams are not required to pit during the competition cautions. Those teams that do not elect to pit may remain on the track and start in front of the pitting teams.

Here are just a few quick notes regarding the first four CWTS races at Eldora: