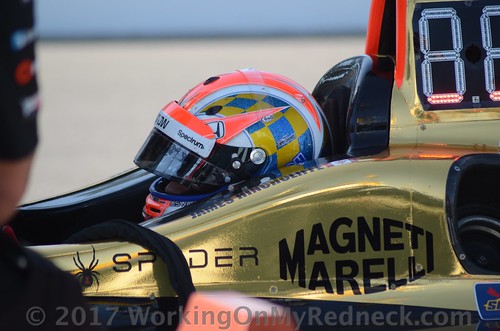 Don’t be surprised to see Canadian IndyCar driver James Hinchcliffe, who’s in Canada to compete in this weekend’s Honda Indy Toronto, racing in a stock car sometime in the near future.

Although he’s committed to his open wheel Schmidt Peterson Motorsports (SPM) team, the 30-year-old Canadian would like to get his feet wet on a road course in NASCAR’s second tier Xfinity Series sooner rather than later.

“We hit the ground pretty hard in the last 18 months trying to make it happen,” says Hinchcliffe, who has had contact with some NASCAR outfits but things haven’t progressed to the point where there’s any solid lead on a seat.

“I have always wanted to try it and a road course is the best way to ease into it. We want to do it right but it’s not something I am looking at in anticipation of a career switch.”

It sounds like another “open wheel dude” wants to try his hand at racing “door slammers”!  These days racing “taxi cabs” appears to be much safer than driving the open wheel cars.  Additionally, it appears that the paychecks are much higher in NASCAR over what the IndyCar drivers earn per annum.

As always, this is a sport that requires a whole lot of sponsorship dollars to accompany the driver!  You could be the most talented driver, but if you do not have a “sugar daddy” sponsorship package, your chances of securing a competitive ride in NASCAR is next to zero!

Can James Hinchcliffe put together a sponsorship deal that will allow him to comfortably transition from IndyCar to NASCAR soon?  Can he learn how to race these “taxi cabs” and be competitive quickly?  There are a number of questions and obstacles that “The Mayor of Hinchtown” will be confronted with, and must overcome, if he does transition to NASCAR in the near future.