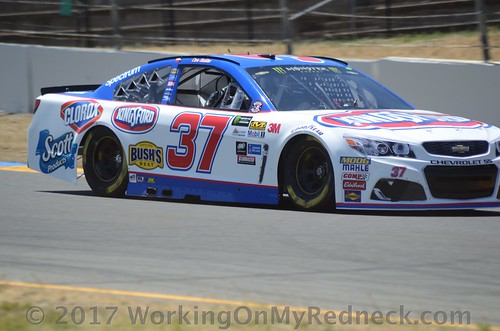 Chris Buescher anticipates he will be back with JTG Daugherty Racing next season, which would remove his name from NASCAR’s free agent feeding frenzy that began this week.

While Matt Kenseth won’t return to Joe Gibbs Racing and Erik Jones will take his place next year, the driver of the #37 Chevy told “The Morning Drive” on SiriusXM NASCAR Radio that his own “silly season” should be stress free.

“It’s coming along,” Buescher said. “We’re in the process, we’re trying to get everything ironed out and be able to move forward. The plan right now is to try and do the same thing next year with JTG Daugherty. Obviously, it’s a little early and this has been one of the wilder silly seasons right off the bat that I can remember. I think for us it’s going to be a pretty easy one. I think we’re trying to get everything squared away on some detail stuff right now.”

Buescher, in his second full-time season in the Cup Series, is on loan to JTG Daugherty Racing from Roush Fenway Racing. Buescher has been with Roush since 2009 and won the 2015 Xfinity title with them. JTG Daugherty Racing leased a charter from Roush in order to run Buescher’s car. The charter must be returned to Roush or purchased after this season. Roush does have charters for two other cars it could lease to the team as an option.