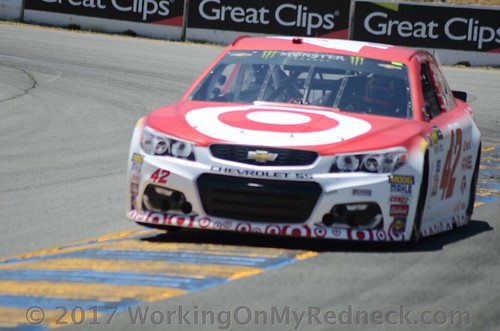 Larson dominated Friday’s Monster Energy NASCAR Cup Series knockout qualifying session at New Hampshire Motor Speedway, posting the fastest lap in each of the three sessions. Because of the penalty, Larson will start last for the second straight race — the No. 42 failed to clear pre-qualifying inspection last week at Kentucky.

Larson’s speed of 133.324 mph was thrown out after NASCAR officials discovered an unapproved rear deck fin on his Chip Ganassi Racing No. 42 Chevrolet. That elevated Truex’s Furniture Row Racing No. 78 Toyota (133.077 mph) to the first starting spot for Sunday’s Overton’s 301 at the 1.058-mile track.

Larson, who had swept all three rounds of qualifying, will now start at the rear of the 39-car field.

When it rains, it pours!