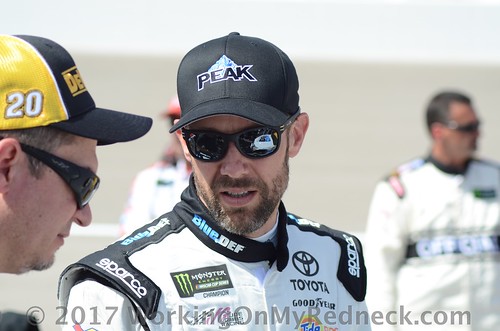 The announcement of Erik Jones as the replacement for Matt Kenseth in the No. 20 Toyota by Joe Gibbs Racing could be the first in a multitude of driver moves for the 2018 Cup season.

There are many drivers, sponsors and teams whose plans for next year have yet to be put to paper, solidified, and published.

Here is a rundown of who could be headed where and with whom:

—Erik Jones will be in the Joe Gibbs Racing No. 20 Toyota, thus forcing Matt Kenseth out of the JGR stable of drivers, and a free agent for 2018.  This fact we know for sure!

—No. 88: Team owner Rick Hendrick hasn’t revealed what direction he will go to fill the HMS No. 88 for 2018, telling reporters at Daytona there was no timetable for naming Dale Earnhardt Jr.‘s replacement.  Rick Hendrick has a few options for this team, he could hire Matt Kenseth to fill in for the short term while his young star, William Byron, gets another year of experience in the Xfinty Series.  He could also stick young Alex Bowman in this ride in the interim as well, or put him in the JR Motorsports No . 9 if Byron is promoted to Cup.

–No. 5: This car virtually has no sponsorship announced for next season, and Kasey Kahne’s status is uncertain. It is believed that Kahne is under contract to HMS through the end of 2018, with HMS carrying the option.  With Kanhe not being very productive throughout his stint with HMS, Hendrick would very easily terminate that contract and move in another direction with a new driver, possibly Kenseth, or HMS’ test driver, Alex Bowman, Brad Keselowski, Kurt Busch, or possibly Paul Menard.

Is appears that Hendrick Motorsports seems committed to remaining a four-car team next year.

—No. 77: Jones is returning to Joe Gibbs Racing after one season in Furniture Row Racing’s new car. Team owner Barney Visser said after Kentucky that “we have nothing concrete. … Our hope is to have two cars.” 5-hour Energy has an option to return in 2018 and can’t leave for another team. There is speculation Furniture Row Racing might move 5-hour Energy to the 78 with Martin Truex Jr., which would seem to leave this ride’s future in doubt.

If Visser is to keep the No. 77 viable and functioning, then the driver selected to fill the slot would have to bring turn-key sponsorship with him to Denver!

—No. 10: Sponsorship has yet to be announced for next season, and Danica Patrick’s contract is in its last year with the team.  With the trouble securing proper sponsorship for Patrick this year, it would appear that the interest in Danica Patrick by corporate America is declining.  Therefore, the SHR No. 10 may have a different driver in the cockpit in 2018, and if Cole Custer is promoted to Cup, a different number as well.  Custer has been using the 00 number on his NCWTS and NXS rides, which was one of the numbers that Gene Haas has used when he started up his Cup team.

—No. 41: Stewart-Haas Racing is facing a sponsorship problem.  NASCAR and SHR sponsor Monster is mulling whether to return as a team sponsor in addition to its series title sponsorship. Monster must inform NASCAR within the next few months if it’s picking up the option on its series title sponsorship (which is a two-year deal with a two-year option). Co-owner Gene Haas has indicated Stewart-Haas Racing wants to stay at four cars. But if sponsorship isn’t there, contraction could become an option for the team.

—No. 2: The news on whether Brad Keselowski will be re-signed to a Team Penske contract has not been revealed yet.  If he were to leave, Miller Lite is expected to stay and is said to like Ryan Blaney as a possible replacement driver (whose social media persona and youth would seem a good fit for a beer company).

—Brad Keselowski: Still hasn’t re-signed with Team Penske. There are conflicting reports on whether the deal is virtually done or negotiations are at an impasse. The sticking point is believed to be more support from Ford for his Brad Keselowski Racing truck team, similar to the way in which Toyota Racing Development helps subsidize Kyle Busch Motorsports’ trucks. (Keselowski sparked an interesting discussion last week by saying that NASCAR needs more manufacturers.)

—Matt Kenseth: Is out at Joe Gibbs Racing but wants to remain in a championship-caliber ride. Hendrick’s Nos. 88 or 5 seems the most likely landing spots, and he has a good friend in Dale Earnhardt Jr. to lobby on his behalf. Stewart-Haas Racing seems as if could be a possibility to fill either the No.41 or the No.10 rides.

—William Byron: Hendrick Motorsports has gauged the 19-year-old’s comfort level about a promotion to Cup. Rick Hendrick and Axalta (which has sponsored Byron in Xfinity races and likes his personality and potential) would like to move him up.

—Kurt Busch: The 2017 Daytona 500 winner said at Daytona he is waiting for Stewart-Haas Racing to pick up his contract option and was optimistic that it would because “I deliver for the team.” Also mentioned there were many “moving parts” involving Monster and NASCAR.

—Kasey Kahne: Has a deal through next season, but the team controls the option to keep him, and it’s widely thought it could be his last year at Hendrick.  If this is his last year at HMS then he too could be a key player in the silly season.

—Ryan Blaney: Roger Penske said recently he wants to bring Blaney into the fold as early as next season, possibly in a third full-time car (or perhaps in the No. 2 if Keselowski were to leave).

—Danica Patrick: In her final year with Stewart-Haas Racing. She said last month she intends to drive next season, but the sponsorship uncertainty leaves her status murky for next year.  Looking at the sponsorship difficulties have have prevailed for her this year, Patrick may be forced out of the NASCAR arena in 2018.

—Paul Menard: Hasn’t been announced as returning to Richard Childress Racing, and the Menards sponsorship could be on the move (it already sponsors Team Penske in the IndyCar Series).  However, as long as his father, John Menard, wants to write the big check, Paul will have a ride with some team.

—Aric Almirola: He hasn’t been announced yet as returning to RPM next season. Almirola has been tied closely to sponsor Smithfield, which also had been mulling a move in its contract year, but which just had a key decision-maker leave.

—GMS Racing/Spencer Gallagher: The team is mulling a move next season to Cup from the Xfinity Series. At Kentucky, Gallagher told SiriusXM that racing in Cup “definitely is a subject that has been broached, and we’ve put a lot of thought into it. We’ve always known that is our long-term goal to be racing in Cup. We’re looking at different ways we might do it and different times in which it would be best. It’s still in the formative stages.”

It is July, just barely past the the halfway point of the season, and “The Silly Season” is now in full swing.  The aforementioned drivers and teams is just the tip of the iceberg that may come into play as the 2017 season shifts into high gear.  There is no doubt that there may be a few more players, teams as well as drivers, that will be put into play before the season ends at Homestead.