A.J. Foyt’s ABC Supply team switched to Chevrolet this season with 25-year-old drivers Carlos Munoz (No. 14) and Conor Daly (No. 4). Munoz placed 20th and Daly 19th in the Iowa Corn 300 at Iowa Speedway in Newton, Iowa. 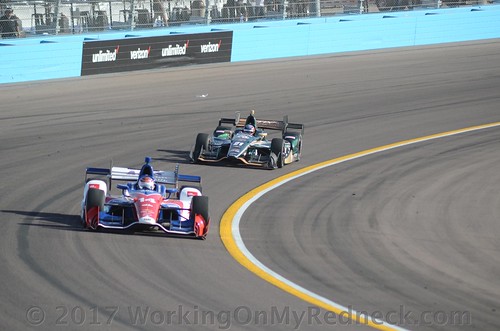 CARLOS MUNOZ: “It’s good to have back-to-back weekends of racing so we can forget this last race and go on to Toronto. I love that city. Toronto is a technical track, and it has undergone some changes the last few years and this year as well. It is similar to Detroit with a lot of surface changes and it’s bumpy so you have to have a car with really good mechanical grip. And like Detroit, the outcome depends on the yellows so strategy is important.  The last part of the track is different from what it used to be years ago and it will be a little different again but I think the track will be a little bit safer as a result–we will see when we get there. For sure it’s a challenge for everyone, and we’re back to road course mentality. I’m looking forward to it.”

CONOR DALY: “I always look forward to getting back to Toronto because the Canadian fans love IndyCar racing. It’s a great venue in the city and it’ll be nice to get back to street racing. I almost made the fast 6 there last year so really hoping to find some speed again and have a solid weekend as a team.”

Toronto: “Toronto is a busting city with great restaurants and atmosphere. I have a couple friends there, so it is always nice to be able to see them and have them to the races.”

Success at Toronto: “In recent years, we have had a competitive street course package, and Toronto is a classic IndyCar street course. We have struggled this season to adapt to the new package and drivers, but maybe our good fortunes at Toronto will continue.”

Team’s progress: “It’s been disappointing. We expected a slow start with all the changes, but we certainly didn’t expect to still be struggling so mightily at this point in the season.  There are many good people working hard on it. No one is giving up, and in this final stretch of races, we need to gain some momentum to lead into the winter development program.”

ABC Supply celebrates its 35th anniversary this year. The company was founded in 1982 by Ken and Diane Hendricks with just three stores. The company now has over 700 stores and topped $7 billion in sales in 2016. ABC Supply began sponsoring the AJ Foyt Racing team with the 2005 Indianapolis 500. The company has leveraged its involvement by entertaining over 84,000 associates and customers over the past 12 racing seasons.

Rinus VeeKay Returns To ECR For ’22