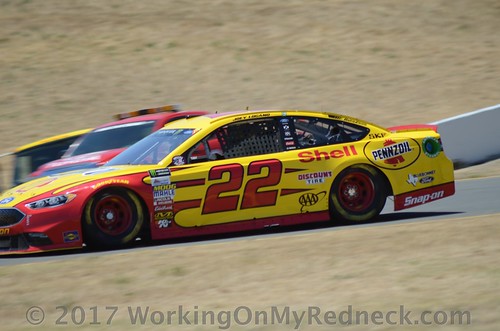 Recap: Brad Keselowski and the No. 2 Miller Lite Ford Fusion team entered Saturday night’s Quaker State 400 at Kentucky Speedway as the winningest team in the short history of the event, but an accident on lap 88 kept them from contending for their fourth win at the track. After starting the race from the 10th position, the 2012 Monster Energy NASCAR Cup Series champion struggled with the handling of his Ford at both ends of the tricky, 1.5-mile oval as both ends of the track are drastically different. A tight-handling issue in Turns 1 and 2 gave way to a loose-handling condition on the entry of Turn 3. As a result, Keselowski dropped several spots before the competition caution at lap 30 gave crew chief Paul Wolfe a chance to make adjustments. The air pressure and wedge adjustments had a positive effect on the tightness, but Keselowski continued to build loose at the other end of the oval. He would cross the finish line in the 12th position at the end of the first, 80-lap stage. A solid pit stop by the Miller Lite crew pushed Keselowski up to the seventh position at the start of the second, 80-lap stage, but upon entry into Turn 3 the No. 2 Ford stepped out from underneath Keselowski, collecting both the No. 14 of Clint Bowyer and the No. 48 of Jimmie Johnson. After quick diagnosis it was determined that the damage was too severe to continue and Keselowski was credited with a 39th-place finish.

Quote: “I just got in an aero wake and it pulled me around. I knew I was in a bad spot. I was trying to lay up but there is only so much you can lay up here because you get ran over from behind. The air pulled me around. It sucks. I feel bad for everyone on the Miller Lite Ford team and I think I tore up two or three other guys and that sucks for them. I don’t know. It is kind of a tough spot to be in on these tracks where they are kind of one groove. You can’t just lay up every time. You give up too many spots or get ran over from behind. If you drive in with someone close to you the car just spins out. It just sucks but it is what it is. We have to find a way around it and we didn’t today.”

Recap:  Joey Logano started 11th and finished eighth in Saturday night’s Quaker State 400 from Kentucky Speedway in the No. 22 Shell-Pennzoil/Autotrader Ford Fusion. Logano, who started inside the sixth row, quickly worked his way inside the top-10 in the opening laps of the event, however, the short-run speed didn’t translate to long run success in the opening stage as Logano drifted back outside the top-15, finishing the first stage in 18th position. During the first stage, Logano radioed crew chief Todd Gordon and reported that the brake pedal was getting soft and that he had to work extremely hard at preserving the brakes throughout the entire run. On the second pit stop of the evening, Gordon elected to pull tape from the nose, allowing more air to reach the brakes. The fix worked as Logano didn’t report another issue about the brakes for the remainder of the event. Although the soft pedal was fixed, Logano continued to battle an ill handling racecar through turns one and two, reporting the car was landing both loose and tight simultaneously, complicating matters was that Logano felt he had one of the strongest cars through turns three and four. The team tried a variety of adjustments, utilizing air pressure, spring rubbers and wedge to correct the condition. At the conclusion of the second stage, Gordon opted to leave the Shell-Pennzoil/Autotrader Ford on the track, handing the lead of the race to Logano and positioning the team for an eventual top-10 finish. Logano held the lead for seven laps before dropping to second where he ran until he made his green flag pit stop at lap 205. Fortunately, Gordon’s strategy call played out as the other leaders cycled through the pits under green. At lap 255 Logano was lapped while running in the ninth position, however, a caution with two laps remaining presented the team with the free pass. Logano missed a multi-car incident on the front stretch as the field took the white flag, bringing the car home in the eight position. The finish was the second top-10 for Logano in the past three races as the team works to build momentum and secure a playoff berth. Earlier in the day, Logano had raced his way to a top-10 finish in the No. 22 Discount Tire Ford Mustang in the rain delayed NASCAR XFINITY Series event, bringing the drivers total miles completed to over 700 for the day.