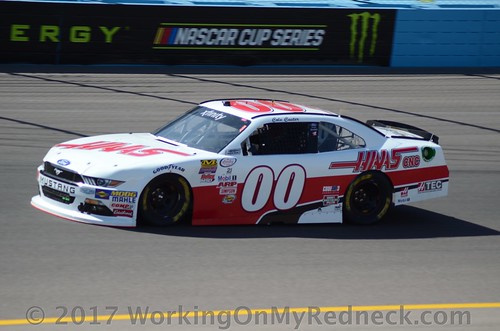 ● Ran in and around the top-five throughout the stage. Highest running position was third.

● Pitted for two tires and fuel at conclusion of stage.

● Custer noted his Haas Automation Ford Mustang was loose on landing in between turns one and two of the 1.5-mile oval.

● Ran just outside the top-10 for the majority of the stage.

● Pitted for four tires, fuel and adjustments at conclusion of stage.

● Custer was caught in traffic at the beginning of the stage and fell back to the 16th place.

● After a lap-168 caution, Custer pitted for two tires, fuel and adjustments to restart in the 10th position.

● Ran as high as seventh before the conclusion of the race.

● Custer’s 11th-place finish in the Alsco 300 was his best result ever at Kentucky. Prior to the race, Custer had one XFINITY Series start and one NASCAR Camping World Truck Series start at Kentucky. Both came in 2016 and he finished 32nd and 14th, respectively.

● Custer moved up one spot in the championship standings to sixth, 27 points behind fifth-place Brennan Pole and 210 points behind series leader Elliott Sadler.

● There were eight caution periods for a total of 44 laps.

● Kyle Busch won the Alsco 300 to score his 88th career XFINITY Series victory, his second of the season and his third at Kentucky. His margin of victory over second-place Ryan Blaney was 1.097 seconds.

“We had track position at the start and were able to get some points, but we fought the handling a little bit on our Haas Automation Mustang today. We did get better as the day went on, but just missed it a little bit. We will learn for when we come back.”