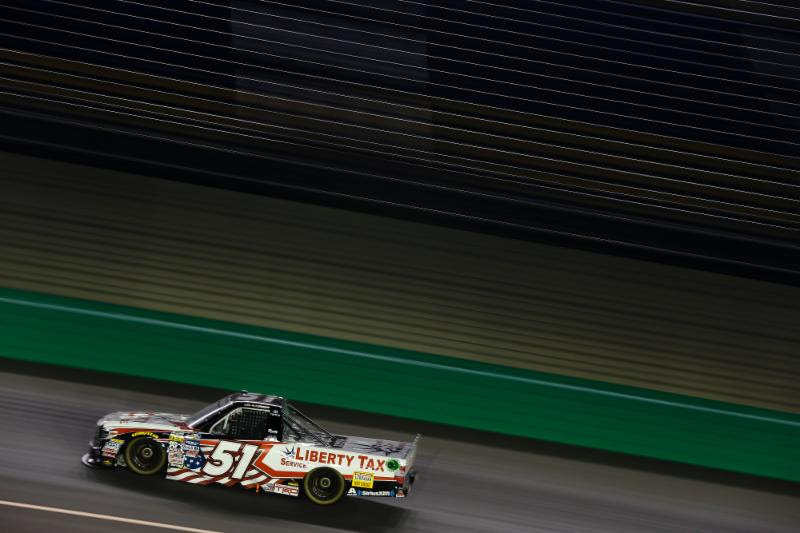 Stage One Recap:
Stage Two Recap:
Stage Three Recap:
Myatt Snider, driver of the No. 51 Liberty Tax Service Tundra for Kyle Busch Motorsports:
Talk about your race…
“KBM brought me a really fast Liberty Tax Service Toyota Tundra this weekend. I am happy to have ran where we did. We had good stage finishes and ran up front all night. I just got too free towards the end and kept us from staying up front. But I am really proud of my guys and I think it was a great race overall and looking forward to the next one.”
Buckle Up in Your Truck Recap:
How Snider’s KBM Teammates Fared:
Noah Gragson, driver of the No. 18 Toyota, finished fifth
Christopher Bell, driver of the No. 4 Toyota, finished first
Kyle Busch, driver of the No. 46 Toyota, finished sixth
NCWTS Owner Championship Standings:
The No. 51 Toyota Racing team is now fifth in the Truck Series Owner Championship Standings.
Next Race:
Harrison Burton will pilot the No. 51 Toyota Tundra when the Truck Series returns on Wednesday, July 19, at Eldora Speedway. Live coverage begins with the NCWTS Setup Show at 9 p.m. ET on Fox Business.
TIL NEXT TIME, I AM STILL WORKING ON MY REDNECK!