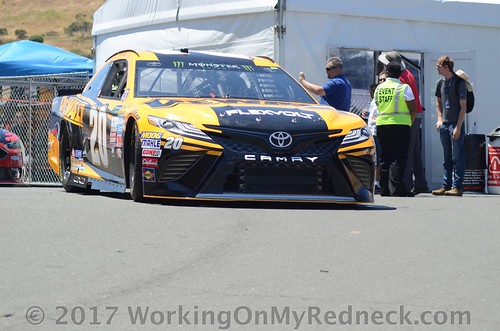 The 45-year-old Kenseth didn’t go into details, but he said Friday morning at Kentucky Speedway that he does not have a ride for 2018. He is winless this year and 11th in the Cup standings.  Being in 11th place in the point standings may not qualify him for a playoff slot this year.

“I do not think I will have the option to race for JGR next year, unfortunately,” Kenseth said prior to practice at Kentucky Speedway.

Joe Gibbs Racing has a driver problem that most car owners would love to be faced with!  JGR likely would replace Kenseth in its No. 20 Cup car with Erik Jones, whom JGR allowed to sign a one-year Cup contract with JGR affiliate Furniture Row Racing for 2017.

Jones, 17th in the Cup standings, said Thursday that he didn’t know where he would race in 2018.

“So for me, I’ve been really happy at Furniture Row, and it’s been a steady group of guys over there that I think work really well together. I don’t yet. Hopefully I know soon. It’s kind of getting down to that point. I guess it’s July now, so I’m sure we’ll have an answer here soon.”

There could be an interesting plot twist at the end of 2017, Kenseth could replace Jones at Furniture Row Racing.   Additionally, Kenseth’s name has also has been mentioned as a possible driver to replace the retiring Dale Earnhardt Jr. at Hendrick Motorsports. However, there was an interesting fact regarding the HMS No 88 vacancy for 2018.  Hendrick Motorsports team owner, Rick Hendrick, said very recently that he had no timetable to make a decision and was not feeling pressure to name a replacement to Dale Jr. soon.

Editor’s note: It is this reporter’s opinion that Kenseth will not end up in the HMS No.88, rather, it will probably be William Byron’s ride for 2018.

A full-time Cup driver since 2000, Kenseth left Roush Fenway Racing for Joe Gibbs Racing in 2013. He finished second in the standings in his first year at JGR and has 14 wins with the organization.

“I’m not really worried about it,” Kenseth said. “As of today, I do not have a job for next year, so I certainly hope to still be racing. I think I’ve got some wins left in me and hopefully can race for championships.

“Right now, my focus is on finishing up this year.”

Kenseth is riding a 34-race winless streak and has had three top-5s and six top-10s in 17 races this season.

“It has not been a good year at all — not nearly up to my standards or my team standards,” Kenseth said.

Stay tuned race fans, the decision that Joe Gibbs makes at the end of this season will drastically affect the landscape of the quality rides in the Cup Series!