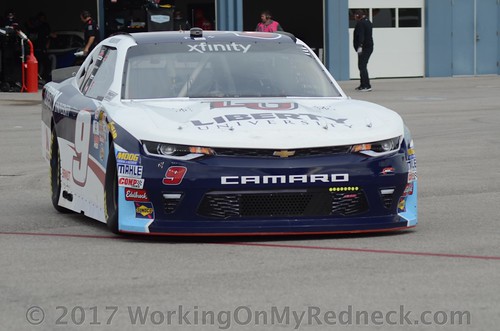 Still, very few foresaw how quickly he’d adapt in his first season in the series where names are made. Byron has elevated his performance as the 2017 campaign hit its midway point with two consecutive victories and three straight top-two finishes.

The 19-year-old Charlotte, North Carolina, native will go for a third consecutive victory in Friday’s Alsco 300 at Kentucky Speedway. Only seven drivers in NASCAR XFINITY Series history have won three straight races. Byron would become the first rookie to achieve the feat.

“I’ve been extremely blessed, you have to have good fortune to win these races,” Byron said. “The other thing is just the confidence that it brings when you do win. You go to the track and you know how to win, what it feels like in those end situations when you’re on the front row or whatever on a restart. Once you get that feeling in your mind and your team gets it, it kind of builds that momentum and you try to keep that as much as you can, you try to keep everything positive.”

“I’m really excited about Kentucky,” Byron said. “Knowing that it is a repave, we will have to approach it with a similar mindset that we had at Texas. We had a solid car there and I think we can do the same thing at Kentucky. Hopefully we can get another win and keep the momentum rolling.”