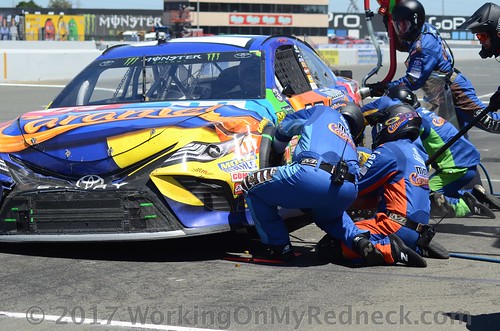 ● Throughout Stage 1 Busch battled a tight-handling Interstate All Battery Center Toyota. He raced as high as 11th place but was unable to make the moves necessary to get to the front of the field.

● The Las Vegas native was in 23rd place by the time Stage 1 concluded. He pitted following the conclusion of the stage, allowing the team to make extensive adjustments to left and right side wedge, change four tires and add fuel.

● With a better-handling Interstate All Battery Center Toyota, Busch wasted no time making a move to the front of the field, racing to fifth by lap 54 and fourth by lap 55.

● While Busch was cruising among the top-10, driver Michael McDowell made slight contact with the No. 18 Toyota. The contact was enough to damage the left-rear fender, creating a rub on the left-rear tire. Busch reported a concern with the rub, and on lap 71 the tire let go, sending the No. 18 spinning into traffic.

● Busch was able to drive the car to the attention of the Interstate All Battery Center team on pit road, where they made repairs and managed to get the car back onto the track within the allotted five-minute window. Busch was scored in 32nd place two laps down when green-flag racing resumed. While the car suffered significant damage, Busch was able to make minimum speed and continue in the race.

● The 2015 NASCAR Cup Series champion carefully logged laps as Stage 3 commenced. Busch was the first driver in the laps-down category when a caution was displayed on lap 98, allowing him to get one of his laps back. Less than 10 laps later another caution was displayed, this time for a multicar accident. Once again Busch was the first driver in the lap-down category and therefore earned the prize of getting a lap back. This time it placed him back on the lead lap.

● After a trip to pit road for four tires and more work on the damaged Interstate All Battery Center Toyota, Busch took the track on lap 110 in 25th place.

● While Busch was able to maintain pace among the lead-lap cars, the damage sustained during the early race accident made it difficult to leverage the draft as needed. He was able to make his way among the top-10 at one point during Stage 3 but would easily lose the draft and drop back in the running order.

● Busch sustained minor damage following the final restart of the race on lap 162 but was able to finish the race on the lead lap in 20th place.

Kyle Busch, driver of the No. 18 Interstate All Battery Center Toyota Camry for Joe Gibbs Racing:

“That certainly didn’t go as we had hoped it would. We felt like we had a pretty good Interstate All Battery Center Toyota for the race. And the guys worked really hard to keep us in it after the accident. It’s disappointing because I think we could have had a shot at the end, but that’s kind of the way it goes with this type of racing.”