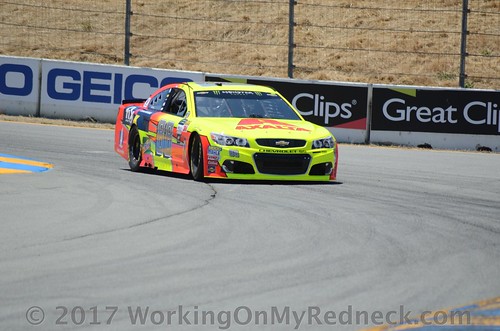 For a few fleeting moments at Daytona International Speedway, Dale Earnhardt Jr. seemed poised to write a miraculous ending to the story almost everyone tuned in to Saturday night’s Coke Zero 400 Powered by Coca-Cola wanted to read.

In what was to be Earnhardt’s final ride at Daytona as a full-time Monster Energy NASCAR Cup Series driver, Earnhardt started from the pole but lost the lead to Hendrick Motorsports teammate Chase Elliott on the first lap.

But NASCAR’s most popular driver brought the crowd to life on Lap 36 when he passed Brad Keselowski for the lead with a push from Ryan Blaney. Earnhardt’s stint at the front of the field was short-lived, as Keselowski got the top spot back one circuit later and went on to win the first 40-lap stage.

On Lap 52, heading into Turn 1 at 190 miles per hour, Earnhardt felt his right front tire losing air, but he was trapped in the outside lane and couldn’t break out of line. Unavoidable contact from Paul Menard’s Chevrolet sent Earnhardt’s Chevy into the outside wall, causing him to lose two laps as he brought the car to pit road for repairs.

“We brushed the wall a couple of laps earlier, and I thought everything was OK,” Earnhardt said. “I came through the tri-oval and I had a right front going down, and it was trying to spin out, so I was trying to lift, but there was really nothing I could do, because there were so many guys behind me. We got into (Turn) 1 and hit the wall.”

But Earnhardt persevered, and with two “lucky dogs” (as the highest-scored lapped car), he returned to the lead lap under caution on Lap 90 of a scheduled 160. After restarting 31st on Lap 95, he had driven up to 17th place two laps later.

Thereafter, Earnhardt ran as high as sixth and was holding seventh when Kevin Harvick blew a tire and turned in front of him. The result wreck knocked both Earnhardt and Harvick out of the race, as well as Keselowski.

But for a brief time, Earnhardt had visions of taking the car to Victory Lane at Daytona one last time.

“Oh yes, as soon as we got our lap back, I knew anything was possible,” Earnhardt said. “We were just kind of drafting right back up there and I think the No. 4 (Harvick) got a flat. I had nowhere to go, but it was fun. We had a pretty strong car.”

The early exit brought to an end a hectic week, one in which Earnhardt was almost embarrassed by the accolades he received.

“I just didn’t expect all that attention all week,” he said. “My phone buzzing all day long with social media going crazy. Everybody talking about this being my last Daytona race. I hope every weekend isn’t like this, as far as that goes.

“The attention and the reaction from the fans makes me feel great. Hopefully, we’re able to turn that around and back on them for the rest of the season and thank them for all they’ve done.”

Worry not JUNIOR NATION there is one more plate race left, the Talladega Superspeedway, and maybe there might still be a fairytale ending to Dale Jr’s racing career!