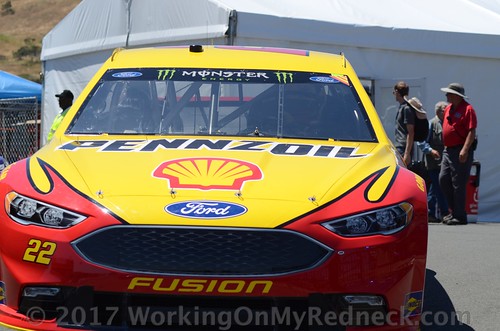 Recap: Brad Keselowski and the No. 2 Detroit Genuine Parts dodged two incidents in Saturday night’s Coke Zero 400 at Daytona International Speedway, but a third ended his night early with a 31st place finish. After starting the race from the third position, Keselowski quickly assumed the lead on the fourth lap of the first, 40-lap stage and cruised to his third stage win of the season. Following a four-tire stop with no adjustments during the break, Keselowski restarted the second, 40-lap stage from the 10th position. The first near miss of the night came at lap 71 when Keselowski masterfully drove through a multi-car incident just in front of his No. 2 Ford.  After driving up to the seventh position early in the run, the former series champion got shuffled back in the pack before rallying to finish the second stage in the 11th position. The final, 80-lap stage began with Keselowski in the 16th position, but again he began working his way through the field. Another near incident at lap 98 placed Keselowski inside the top 10, but he would be involved in a multi-car incident a few laps later at lap 106. The No. 2 crew tried valiantly to make repairs to the Ford Fusion, but after two cut tires it was obvious that something was broken and the team had to retire early.

Quote: “Tonight was a ‘glass half full’ night. We won another stage and picked up another playoff point, but I really thought we had a Detroit Genuine Parts Ford that could have won this race. It was a much different race tonight that it has been in the past, particularly with the shorter stages and softer tires.”

Recap: Joey Logano started seventh and finished 35th after a lap 71 incident in the Coke Zero 400 at Daytona International Speedway on Saturday night. Logano demonstrated early in the race that the No. 22 Shell-Pennzoil Ford Fusion was one of the fastest cars in the field, running inside the top-10 until the team pitted at lap 16. As a majority of the field stayed out, Logano restarted 25th but raced his way to the fifth position before the end of the first stage. At the conclusion of the stage, crew chief Todd Gordon called Logano to the pits, changing four tires and making air pressure and wedge adjustments to the 22. Unfortunately, the stop was slowed after contact with another car entering the pit. Logano would restart in the 18th position but start working forward. On lap 60, the team elected to stay out with only 11 laps on tires and restart inside the top-10. Unfortunately, the night would be cut short for the No. 22 Shell-Pennzoil team after the No. 18 of Kyle Busch cut a left rear tire, spinning directly in front of Logano and leaving him nowhere to go.

Quote: “I saw four or five laps before the wreck that the 95 got into the side of the 18. I didn’t see any smoke off the 18, just a near miss. Then four or five laps later I think the left-rear popped on the 18 and around he started going and we were there. Wrong place at the wrong time again for us. It’s superspeedway racing. Sometimes you’re on the good side of it, sometimes you’re on the wrong side of it. That was the bad one. We’ll just move and head to the next race.”