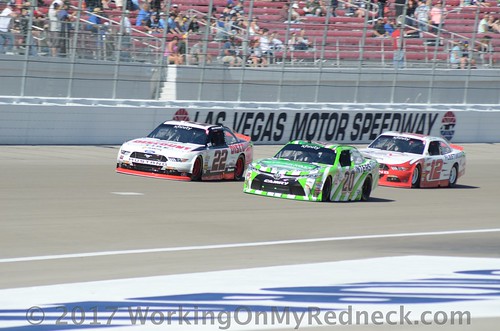 Recap: Joey Logano started 10th and finished seventh in the Coca-Cola Firecracker 250, a race which started on Fridaynight and finished Saturday afternoon after multiple rain delays. At the drop of the green flag on Friday night, Logano found little success moving forward in the No. 22 Discount Tire Mustang as most of the front runners remained in pace lap formation for the opening seven laps. Unfortunately, rain would move in and force a halt to competition for the night at lap 11. The race resumed at 12:00 p.m. ET on Saturday afternoon, but was again halted for rain just after the completion of stage 1. Through the second stage, Logano worked his way from the bottom half of the top-20, back to the 11th position before pitting to setup for a potential run to the finish. The No. 22 Discount Tire Mustang handled well throughout the event with crew chief Greg Erwin calling for minimal adjustments with wedge and air pressure. In the closing stages of the race, Logano would find help from fellow competitors in the back of the pack, racing through the field and claiming the lead for six laps. However, contact from eventual race winner William Byron would send Logano into the backstretch grass resulting in a masterful save, but a major loss of track position. With four laps remaining, the famed “big-one” would eliminate many of the front-runners and in the process Logano was able to rid the grill of the No. 22 Ford of all the grass and debris collected from his backstretch slide. With the temperatures well within the acceptable range, Erwin elected to leave his driver on the track for the NASCAR Overtime Finish. Logano was again charging through the field when an accident took place on the backstretch after the leaders crossed the over-time line, making the race official, with the No. 22 Discount Tire Ford being scored in the seventh position at the time of the caution.

Quote:  “Yeah, it’s crazy out there, right? Elliott (Sadler) and the 48 did a great job pushing me all day. I was able to push the 3 a lot to get us some positions. The 9 hit me in the left-rear on the back straightaway and that just sent me through the infield. We were lucky the nose stayed on it. I thought I was going for a hell of a ride. The front-tire was coming off the ground when I went through the grass. I actually just scooped it up and made a couple of nice plows through the grass.”