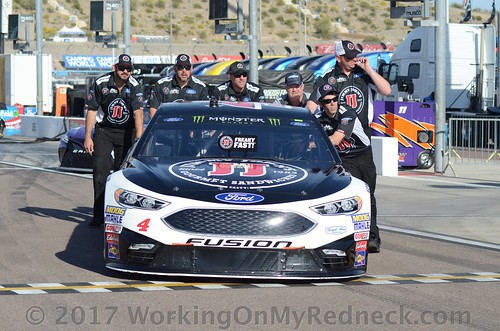 ● The Jimmy John’s Ford stayed out under caution on lap 11 and lap 17 while racing in the top-five.

● Got shuffled back on the final two laps of the stage to finish 19th.

● Came to pit road for four tires and fuel at the conclusion of Stage 1.

● Came to pit road under caution for four tires, fuel and a track bar adjustment on lap 59.

● Returned to pit road under caution on lap 61 to top off fuel and clean debris from the grill.

● Narrowly avoided a multicar wreck on lap 71 while racing in 23rd and advanced to 12th following the incident.

● Restarted 12th and raced up to sixth by the conclusion of Stage 2.

● Stayed out at the conclusion of Stage 2 to take the lead.

● Surrendered the second position tocome to pit road under caution for two tires and fuel on lap 91.

● Restarted from the 14th position on lap 93 and stayed out under caution on lap 99 to rejoin the top-10.

● Cut a tire and was collected in a multicar incident on lap 106 that ended the No. 4 team’s night.

● Harvick led three times for seven laps to bring his laps-led total at Daytona to 236.

● Twenty-one of the 40 drivers in the Coke Zero 400 finished on the lead lap.

● Ricky Stenhouse Jr. won the Coke Zero 400 to score his second career Monster Energy NASCAR Cup Series victory, his second of the season and his first at Daytona. His margin of victory over second-place Clint Bowyer was .213 of a second.

● Kyle Larson leads the championship point standings with 667 points and has an 18-point margin over his nearest pursuer, Martin Truex Jr.

“We just blew a tire. I hate it for our Jimmy John’s Ford guys. That’s the way it goes. It just blew out right in the middle of the corner. I hate to wreck half the field. That’s a part of what we do.”