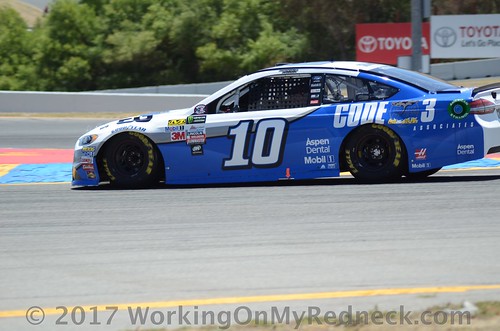 Stage 1 Recap (Laps 1-40):
● Danica Patrick started 10th and finished 22nd.
● The No. 10 Aspen Dental Ford Fusion team had good grip on the right side of the car, but the left-side security was not as good as Patrick would have liked.
● On lap 17, Patrick pitted for four tires, fuel and a front packer adjustment.
● Patrick returned to pit road on lap 43 for four tires, fuel and a left-side tire air pressure adjustment.

Stage 2 Recap (Laps 41-80):
● Started 22nd and finished 21st.
● Patrick was involved in a multicar accident on lap 71 with Joey Logano, Kyle Busch and Austin Dillon. Her Aspen Dental Ford Fusion suffered minor damage, and the crew fixed it before the five-minute clock went off.

Final Stage Recap (Laps 81-160):
● Started 27th and finished 25th.
● Patrick dodged one big accident, but unfortunately was involved in one on lap 154 along with Matt Kenseth, Ryan Blaney, Kurt Busch and Darrell Wallace Jr. She was able to drive the car back to the pit area, but the damage was too great and she was forced to climb from the car on pit road.
● She was checked and released from the infield care center.

Coke Zero 400 Notes:
● This was Patrick’s 11th Monster Energy NASCAR Cup Series start at Daytona and her 171st career start.
● Patrick earned 12 points in Saturday’s race at Daytona International Speedway, which puts her at 208 total points for the season thus far. She is ranked 29th in the driver point standings.
● The race finished in overtime, going three laps past its scheduled 160-lap distance.
● There were 14 caution periods for a total of 51 laps.
● Only 21 drivers in the 40-car field finished on the lead lap.
● Ricky Stenhouse Jr. won the Coke Zero 400 to score his second career Monster Energy NASCAR Cup Series victory, his second of the season and his first at Daytona. His margin of victory over second-place Clint Bowyer was .213 of a second.
● Kyle Larson leads the championship standings with 667 points and has an 18-point margin over his nearest pursuer, Martin Truex Jr.

Danica Patrick, driver of the No. 10 Aspen Dental Ford Fusion for Stewart-Haas Racing:
“I don’t really know what happened. Not totally sure. We all went low down the back straight, and then they got up to speed and we came around turn four. I am not sure what happened, but having seen the replay it looked like Ricky (Stenhouse Jr.) and Kyle (Larson) and then we ran out of room. I think maybe the 20 (Matt Kenseth) checked up or got hit from the outside, and that hit me. That is why I don’t want to be on the bottom. I promised I wouldn’t be on the bottom when it came to the end, and sure enough I go to the back saying I didn’t want to be on the bottom, but you have to race and go where the momentum goes. It is what it is. It was crazy. We got the car better early on in the race and were able to kind of get in there, but still not quite enough. Not enough. We were in the mix, though.”
TIL NEXT TIME, I AM STILL WORKING ON MY REDNECK!