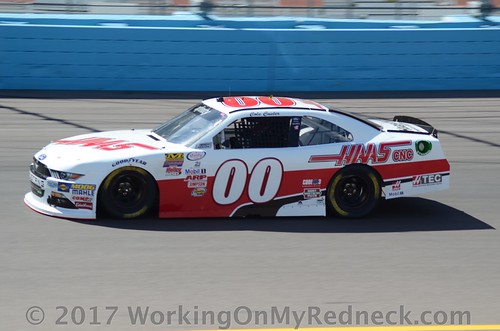 ● Inclement weather on lap nine brought out the red flag, ultimately postponing the race until 12 p.m. EDT on July 1.

● Custer ran toward the back of the field, noting tight-handling conditions throughout Stage 1.

● On lap 50 Custer was involved in an accident, which pushed him toward the rear of the field.

● The racecar was not damaged, but Custer was called to pit road by crew chief Jeff Meendering for four tires, fuel and adjustments.

● Custer continued to note tight-handling conditions throughout the final stage.

● He drove his Haas Automation Ford Mustang into the top-10 by lap 83.

● On lap 99 Custer was involved in a multicar accident that brought out the red flag for nine minutes and 56 seconds.

● Custer battled his way to finish just outside of the top-20 before the conclusion of the race.

● Due to an accident not of his making in the final XFINITY Series practice on Thursday, Custer was forced to a backup racecar in the Coca-Cola Firecracker 250.

● William Byron won the Coca-Cola Firecracker 250 to score his second career XFINITY Series victory, his second of the season and his first at Daytona.

● Elliott Sadler, who finished second in the Coca-Cola Firecracker 250, leads the championship standings with 553 points and has a 59-point margin over Byron, his nearest pursuer.

“We had to go to our backup Ford Mustang and worked really hard to get it out there. It was really fast and handled really well, and the guys worked hard all weekend. We could have been better handling-wise, but we were okay. I just got caught up in that wreck there at the end.”