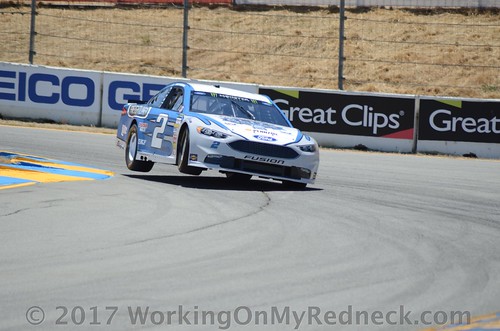 Beginning at this weekend’s NASCAR race at Daytona International Speedway (DIS), fans and families of service men and women can visit CheckeredFlagFoundation.org to nominate a person that has sacrificed for our country. Nominees will have their name displayed on the No. 2 Miller Lite Ford Fusion for the Monster Energy NASCAR Cup Series (MENCS) race at Phoenix on November 12, Veterans Day weekend across the United States. The special promotion will run through the MENCS regular-season finale at Richmond International Raceway on September 9.

The cost is $100 per nomination, which is fully tax deductible, and all proceeds go to the Checkered Flag Foundation. In addition to being recognized on the race car, each nominee will receive a piece of the No. 2 Ford Fusion’s sheet metal that shows their name, along with a photo of the car and a letter of thanks from Keselowski. Fans can use the social media hashtag, #Tribute2Veterans, to highlight their nominee online as well.

“The Checkered Flag Foundation (CFF) celebrates veterans and they work to not only honor them but hopefully enrich their lives through various programs,” said Keselowski. “This unique fundraiser will go directly to those programs, while also providing a one-of-a-kind experience to have veterans virtually ride along with me at Phoenix as we try to earn a trip to the Championship 4 the following weekend at Homestead. Whether through the CFF or the Team Penske relationship with the Paralyzed Veterans of America, we are always looking for ways to give back to those that have helped defend our freedom. I think this is another great example of partners working together for a great cause.”

Keselowski is proud of his patriotism and to make this holiday weekend even more special, the 2012 MENCS champion and last year’s Coke Zero 400 race winner has teamed up with DIS to provide 200 race tickets for Saturday night’s Coke Zero 400 to local military members and their families. The group will be treated to a private meet and greet with Keselowski and DIS president Chip Wile prior to the race.

“Brad Keselowski has always been a big supporter of our Armed Forces,” said Wile. “It’s great to see last year’s Coke Zero 400 champion utilizing Daytona International Speedway and this July 4th race weekend as a platform to have local military personnel enjoy the excitement of NASCAR on the high banks.”

Brad Keselowski’s Checkered Flag Foundation honors and assists those who have sacrificed greatly for our country. Since 2010, the foundation has supported over 50 organizations and individuals in order to help veterans and first responders during their road to recovery. There are numerous ways for those interested to become involved. Visit www.CheckeredFlagFoundation.org for details.