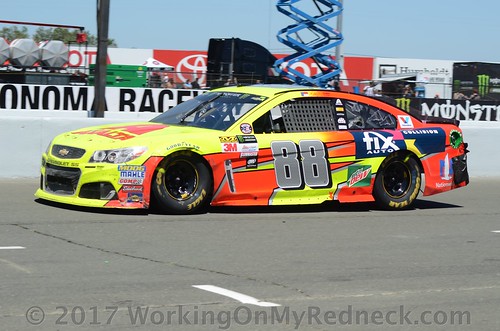 The driver who will step away from the No. 88 Hendrick Motorsports Chevrolet at the end of the season will start first in that car in Saturday’s Coke Zero 400 Powered by Coca-Cola, after edging teammate Chase Elliott by .044 seconds for the top spot on the grid.

The Coors Light Pole Award was Earnhardt’s first of the season, his second at Daytona and the 14th of his career.

In touring the 2.5-mile speedway in 47.127 seconds (190.973 mph), Earnhardt also qualified for the 2018 Advance Auto Parts Clash at Daytona, and that’s what raised the prospect of another race at “The Birthplace of Speed” for NASCAR’s most popular driver.

“Yeah, I’ll talk to my boss man Rick (Hendrick) and see if we can make some arrangement and come back and have some fun,” Earnhardt said after climbing from his car. “I’ll see what he’s got in the shed.”

Elliott (190.795 mph on Friday) has won the last two poles for the Daytona 500, knocking Earnhardt out of the top spot this past February. On Friday, it was turn-about for Earnhardt, who credited Elliott and his No. 24 team for pushing the No. 88 group to the limit.

“I have to give Hendrick Motorsports a lot of credit,” Earnhardt said. “Particularly for me personally, it’s been the No. 24 bunch. We’ve been kind of pushing each other over the last several years in qualifying at Talladega and Daytona. It’s been a healthy competition. That’s why we win poles and qualify so well at some of these race tracks, healthy competition within the company.

“(Crew chief) Greg (Ives) and all the guys deserve all the credit for the car. I don’t do anything in qualifying except hold the wheel and make sure I don’t hit the apron. The car does everything. A lot of credit to the power and the body man back at the shop. All that stuff is so critical, and they did a great job today.”

Elliott’s disappointment at qualifying second was moderated somewhat by Earnhardt’s success, but that doesn’t mean Elliott won’t be trying to beat his teammate on Saturday night.

“It was definitely close,” Elliott said. “I’m happy for those guys. It’s so hard to tell when you’re out there making laps how it’s going to be or if you could do anything any better. But I’m proud of our NAPA Chevy team. We improved a little bit, I think, from Round 1 to Round 2, which was nice. We just didn’t improve enough.

“So we’ll go to work tomorrow. I’m excited for this race. It’s such a cool race here at Daytona under the lights. If you’ve never been here, this is one to come and watch, for sure. I think it’s going to be exciting. That guy (Earnhardt) starting on the pole is obviously fast, and I’ve just got to get in front of him.”

Now if “The Pied Piper of Plate Track Racing” can hoist the hardware in the Coke Zero 400, the fairly tale will be complete and all will be well in JUNIOR NATION and the rest of the world!