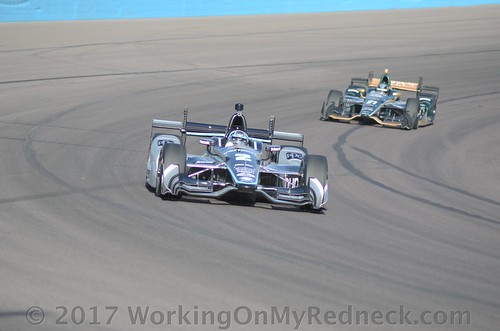 Recap: Building off a podium finish at Texas Motor Speedway, Simon Pagenaud had a strong finish to his weekend at the Verizon IndyCar Series Kohler Grand Prix at Road America in Elkhart Lake, Wisconsin as he finished fourth in Sunday’s race. As the race began, Pagenaud was caught up in a bottleneck and fell a few spots from his starting position of fourth to the sixth position. However, on Lap 2, he was able to gain one spot back as Graham Rahal was penalized for blocking which enabled Pagenaud to reclaim the fifth position. On Lap 12, the French-born driver visited the pits for alternate tires and fuel, after starting the race on primary tires. After returning to the track, he found himself battling with teammate Will Power for the fifth position. Although Power took over the spot, it was only temporary as IINDYCAR penalized Power for blocking as Pagenaud once again secured the fifth position on Lap 18. By Lap 20, Pagenaud was able to move into fourth place and he remained there until his next pit stop. Race strategist Kyle Moyer called Pagenaud into the pits on Lap 27 for primary tires and fuel. On Lap 28, the caution flag waved as Takuma Sato went off course. The field returned to green flag racing on Lap 29 and Pagenaud remained in the top five until his final pit stop for the day on Lap 42. On that stop, Pagenaud’s Team Penske crew serviced the No. 1 Menards Dallara/Chevrolet with a new set of alternate tires and fuel. On Lap 45 a caution flag waved as Tony Kanaan was involved in an on-track incident with Pagenaud running fourth. The race restarted on Lap 48 as Pagenaud continued to run fourth, a position he would keep in his possession through the checkered flag. The result marked Pagenaud’s best career finish at Road America as he and the No. 1 team persevered through a number of minor incidents throughout the day. The team’s next race will be at Iowa Speedway on July 9 as the team continues to defend in 2016 series championship.

Quote: “Yeah, we flew under the radar. You didn’t see my off course but we recovered well. It was an interesting day with all the strategy on tires. We started on blacks which I thought went really well and fuel had a big part in every stint. If you could go a lap longer it was gaining you a lot of time. We didn’t have as much fuel efficiency as (Scott) Dixon but Josef (Newgarden) did an amazing job in the first stint. I think that is what helped him a lot. The car was great and one of these days all four guys are going to be at the front. We were really fast and we raced each other hard but we didn’t have enough push to pass at the end unfortunately. Great to have the Menards Chevrolet here in Wisconsin, the company’s home state.”

Recap: Josef Newgarden and the No. 2 DeVilbiss Dallara/Chevrolet team had a solid result Sunday in the Kohler Grand Prix at Road America. Newgarden recorded his fourth podium finish of the season and he battled for the win until the checkered flag. As the green flag waved to start the race, the Henderson, Tennessee-born driver went to work quickly as he jumped into second place after starting third. He ran second until he visited pit lane on Lap 15 for a set of new primary tires and fuel, after starting on alternate red compound tires. The switch proved to be fruitful as Newgarden took over the lead with a nice pass on teammate Helio Castroneves on Lap 20. Newgarden led the field until Lap 28 when he took another trip to the pits for a new set of primary tires and fuel. Not long after he pitted, the caution flag waved for Takuma Sato’s incident. Scott Dixon was able to get by Newgarden for the race lead on the Lap 31 race restart as Dixon ran on the softer red alternate tires while Newgarden was on black primary Firestone rubber. As the race wound down, strategist Tim Cindric called for the No. 2 Chevrolet to return to the pits on Lap 42 for alternate tires and fuel in the team’s final stop of the day. After the field cycled through the stops, Newgarden ran in second place once again. On Lap 45, Tony Kanaan made contact with the wall, which brought out the second caution flag of the race. After the incident was cleared, the green flag flew again on Lap 48. This exciting restart gave Newgarden the opportunity to battle with Scott Dixon for the lead for one final time but ultimately, Dixon prevailed as Newgarden finished second for his best Road America result. Newgarden and the No. 2 team leave Wisconsin ranked fifth in the series standings, just 61 points behind Dixon, as the series advances to Iowa Speedway in two weeks where Newgarden returns as the defending champion.

Quote: “Yeah, you can’t predict that stuff (being on black tires during the pivotal pass for the lead in the battle with Dixon) and I think our strategy was spot on. We were doing what we needed to do to stay out front there all day. But you just can’t predict those yellows and some days they fall your way and some days they don’t. Today they didn’t fall our way. Dixon and the whole Ganassi team did a great job and they deserved to win with the job they did. I felt good about what we had and we had four strong Chevrolets all weekend with Team Penske. It stings a bit that we didn’t get the win because of how good this car was all weekend. We looked good and you couldn’t miss us with DeVilbiss onboard. We had the fastest lap which was pretty cool and I am just proud of all our guys. Just disappointed we couldn’t get it done.”

Recap: Helio Castroneves started Sunday’s Kohler Grand Prix from the pole position after earning the Verizon P1 Pole Award on Saturday at Road America in Elkhart Lake, Wisconsin. It was his 50th career INDYCAR pole, which gives him sole possession of third place on the Verizon IndyCar Series’ all-time list. The veteran from Brazil beat teammate Josef Newgarden, who started from the outside pole position, to Turn 1 when the green flag waved and Castroneves comfortably led the first 12 laps before heading to pit road for the first of three scheduled stops for the 55-lap race on the 4.014-mile permanent road course. After the first round of green-flag stops, Castroneves cycled back to the race lead. However, Newgarden was able to make his way around Castroneves on Lap 20. From that point, Castroneves was forced to work from behind while managing both tires and fuel. Still running in the top five, Castroneves continued to pressure both Newgarden and eventual race winner Scott Dixon while each had the race lead. Shortly past the 40-lap mark, all of the teams that opted for a three-stop strategy in the race began making their final stops of the day. Both Castroneves and race leader Dixon headed down pit road on Lap 42 but Dixon was able to win the race off pit road to remain in the lead. In the final 13-lap dash to the finish line, Castroneves was unable to keep Newgarden in the rear view mirror and he settled in to his finishing position of third. In a strange twist of events, Castroneves was actually able to move up a spot in the championship standings, but he lost ground to Dixon, who remained in the top spot with the win. Coming off his fifth top-five finish on the year, Castroneves is now 37 points off the pace in the championship chase.

Quote:  “The Rev Group Chevy was good, especially in the beginning. I was taking it easy and saving fuel, a lot of fuel actually. When we put the black (tires) on, I knew it was going to be rough. At the end of the race Scott (Dixon) did a good job saving fuel and going a lap farther. They were fast for sure and it’s a shame because our car was really good without question. But when you battle this close with everyone it’s the difference of one small detail. At the end of the day it was a good day for the points championship. It’s kind of disappointing that Team Penske didn’t get the win here today considering how strong all of the cars were. That’s the way it goes sometimes. We’ll come back ready to go for Iowa.”

Recap: Despite not getting the result he was hoping for, Will Power followed up his July 10 victory at Texas Motor Speedway with a solid fifth-place finish in Sunday’s Kohler Grand Prix at Road America in Elkhart Lake, Wisconsin. He narrowly missed out on his fourth pole win of the season in Saturday’squalifying and started the race from the outside pole position. Once the green flag flew Sunday, Power spent almost the entire race mired in traffic. Just after his first pit stop of the day, Power was penalized by INDYCAR officials for blocking teammate Simon Pagenaud. As a result, Power had to surrender the fourth position to Pagenaud. From there, Power battled from the fifth and sixth spots making contact with a number of cars in traffic while fighting for position. Down the stretch, the 2014 Verizon IndyCar Series champion was not able to get around Pagenaud and crossed the line in fifth place. After a dreadful start to the 2017 season with three finishes outside the top 10, Power has earned three consecutive top-five results and has climbed to sixth in the championship hunt – now 63 points behind the leader.

Quote: “We were just caught up in things all day. The Verizon Chevy was fantastic just as it had been all weekend. I battled good with (Scott) Dixon on that first stint. Maybe we could have gone one more lap on that first set of tires, but the fuel numbers might not have worked out, so we played it safe. My hat is off to Scott (Dixon). I felt pretty good about a Team Penske victory today, but they did a great job. The guys gave me a great car and the we didn’t have any problems in the pits. We gave it all that we could. It will be very interesting from here.”

Next Race: The Verizon IndyCar Series takes a week off before heading to Iowa Speedway for the Iowa Corn 300 on Sunday, July 9 with television coverage on the NBC Sports Network beginning at 5:00 p.m. ET. Tune into the INDYCAR Radio Network or log on to IndyCar.com for additional coverage.